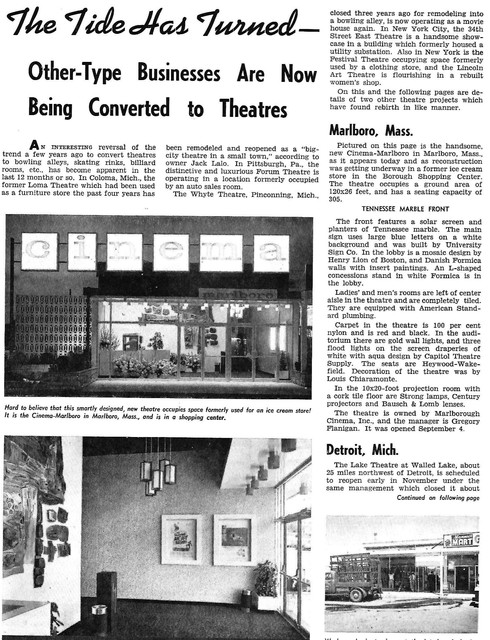 This theatre, a modern cement block structure, was built in the Seventies as a twin and later one of the auditoriums was split in two. It closed in December of 2004 and was demolished in 2006. A Walgreens has been built on the site.

Regretfully, this theatre closed Christmas time 2004. I happened to be there the last night (sheer good luck) to see Ocean’s 12. Tickets were $6, and you could get a large Pepsi, large popcorn, and a candy for $10.

whatever became of the Entertainment Cinemas complex that was adjacent to this theatre?

Good question. Before my time.

The Entertainment Cinema complex was located about a mile east, opening in the early ‘90s, and closed a few years ago.

MARLBOROUGH — It was the place of many first dates, first kisses and first flicks.

Once a popular spot to catch a $1 movie on a Monday or Tuesday night, Marlboroughâ€™s 1-2-3 Cinema, one of the areaâ€™s last independent movie houses, is being renovated into retail space.

The closing credits rolled a year ago, but the lobby, including the final marquee, recently was torn down, providing a final curtain call to three decades of cinematic viewing.

“We closed officially exactly a year ago,” said Grace Battaglino, who ran the three-screen cinema with her husband, John. “It was time after 32 years.”

The Battaglinos sold the property to Phil Gergos, who built a Honey Dew Donuts to the east of the theater and plans to turn the former cinema into retail space.

Gergos, who owns Honey Dew doughnut shops in Milford and Hudson, hopes to have the coffee shop open in a month. He does not have a time line for when the retail space will be completed or what will be located there.

Grace and John Battaglino opened up the theater in 1973 in what now is a busy Rte. 20 corridor. “When we came up here it was nothing like it is now,” Grace said.

The couple did not have a theater in mind when they purchased the property. Two people came to the Battaglinos and asked if they would be interested in building a theater and then leasing it to them. The deal eventually fell through, but the couple proceeded to run with the movie business idea, Grace said.

“I enjoyed going to movies when I was younger and it was something for the children to do,” she said.

The couple has six children, all of whom worked in the theater. The four boys ran the projector while their two daughters sold tickets and refreshments.

“We took the last screen and made two out of it,” she said.

The first film shown in the cinema was “Heartbreak Kid,” starring Cybill Shepherd.

The theater used to have lines of people waiting to catch a movie, especially on the Monday and Tuesday nights where flicks were only a $1.

“It is really funny…some people come up to me and say â€™I had my first kiss in your theater,â€™” she said.

While the prices went up as years went on, the Battaglinos always tried to keep prices lower than the competition.

The couple had mixed emotions about closing but felt it was time, Grace said.

“We were tired. It was time…with all the competition, it was time for us.”

She said the family is happy they could provide a place of entertainment to locals for so many years.

“I think it was great we were able to do that for them.”

Only a few independent cinemas remain in the area as many of them are falling to the large multiplexes.

The theatre was recently demolished and replaced by a Walgreens Phamacy