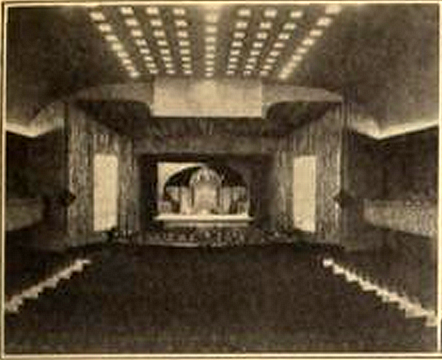 Originally built in 1905-06 as an exhibition hall and arena for the adjoining Berlin Zoo, it was designed by Carl Gause. Arthur Biberfeld converted the hall into a theatre in 1912, but this was short lived and in 1913 cinema architect Oskar Kauffmann transformed the building into the Cines Palast Theater that had a seating capacity of 1,740. On September 18, 1919 it screened Ernst Lubitsch’s “Madame DuBarry” operated by Ufa as the Palast Theatre with 1,700 seats. In 1925 a balcony was added giving a capacity of 2,165 and it was renamed Ufa Palast am Zoo. World Premieres of famous German films were held here: Fritz Lang’s “Die Nibelungen”(1924), Ewald Andre Dupont’s “Variete”(1925), Fritz Lang’s “Metropolis”(1926), Friedrich Wilhelm Murnau’s “Faust-German Folktale”(1926).

In 1936 architect Albert Speer (Hitler’s architect) modernised the building by giving it an Art Deco styled Streamlined Moderne look. The cinema was destroyed by Allied bombs on 23rd November 1943. The ruins were removed in 1955.

In 1957 the current Zoo Palast twin cinema was built on the site.

This page gives essentially the same history as KenRoe described at the top. You can click on the photo to make it a bit larger.
http://tinyurl.com/3q47gp