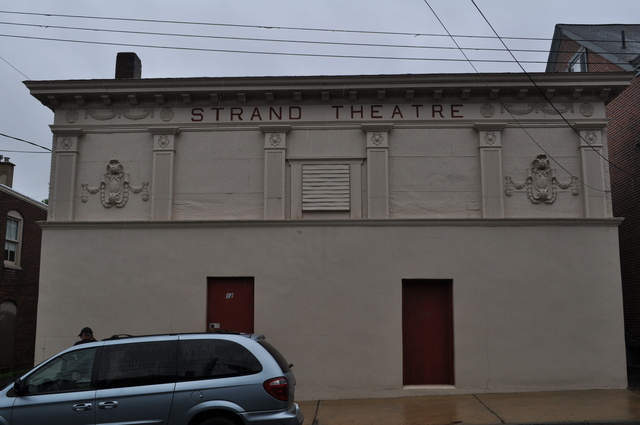 The Strand Theatre was opened in 1915. It was enlarged in 1925. It was still listed in the 1951 edition of Film Daily Yearbook. It currently houses Finkle & Son hardware store, who’s main store is directly across the street.

That business began in 1920 but it is not known when they annexed the theatre building.

Here is the homepage for the hardware store, which mentions the Strand building:
http://www.finkles.com/fr_index.html

Listed in the 1944 FDY. Listed as a Brandt Theater in the 1961 FDY.
Both listings under LambertSville.

I was here last week and it’s located right off the D and R canal trail. On the right is Finkles and across the street is the Strand. Nowhere does it say Finkles uses it. There are no Finkles cars parked there, rather regular cars. The town is an 18th century town so the theater (no fly space) looks and fits in the town with its block design and white color. Strand Theatre is on the top center. There is no marquee or elaborate front doors, rather a white building with 2 single doors, one on either end. Maybe they use it for storage? They have a performing arts center at the other end of town for performances, but Lambertville is such a cool town, they could really use a theater. Across the river in New Hope, they have Bucks County Playhouse, but no real theater either. Both towns flourish with the arts and could use another venue, IMHO.

I know for a fact that Finkles does use it for storage. I often patronize the store and a salesman takes me across the street to The Strand many times for my items. The theatre had been gutted by fire and Finkles purchased it for a much needed warehouse. The theatre specialized in foreign films and it was a perfect venue for the area.
Yes, the area could use a movie house of this kind.

Here is an item in the Bucks County Courier Times, dated 4/3/69:

The New Strand Theater in Lambertville, N.J. has resurrected itself in a drive-in. The theater, demolished by a fire on March 26, will re-open on Saturday with the same program scheduled for that day. The theater will be using the Ringoes Drive-In theater in Ringoes, N.J. The drive-in has been leased to the theater for the entire summer during which movies originally planned will be shown.

Being shown on Saturday will be “A Thousand Clowns”, with Jason Robards, William Daniels and Barbara Harris and “Murder Czech Style”, a new Czechoslovakian comedy directed by Jiri Weiss. Both will run for four days. On Wednesday, the New Strand will resume its regular schedule with “Hiroshima, Mon Amour” and “To Die in Madrid.â€

To Fellini, Juliette and the strand In 1965 I could go to the Hunterdon theatre in Flemington and watch Winnie the Poo or Guns of Navarrone but I drove a little further with other high school sophomore friends to Lambertville. There The Strand was showing Juliette of the Spirits. My small adolescent reality was pulverized. The Strand became a resource of art film and culture I continued to visit though out high school. My life is so much the better for it.

A 1934 program from the Lambertville Strand Theatre.

The trade press reports the opening of the Strand Theatre at 14 Coryell Street in 1915. It had a 14x18' gold fibre screen and Seeburg Orchestral at its launch. The theatre was enlarged ten years later.