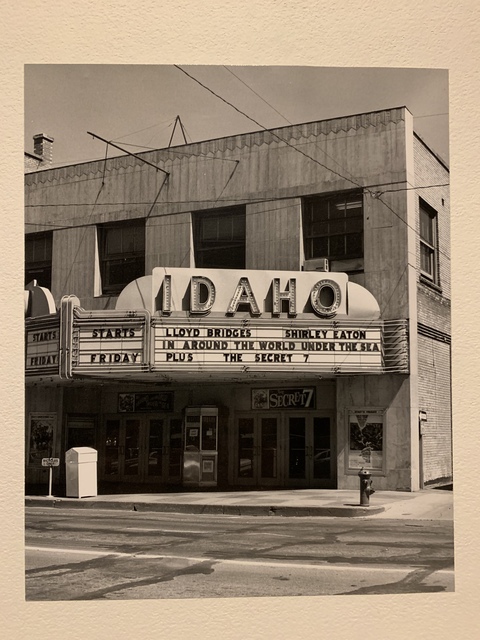 The Idaho Theatre was opened June 23, 1916. In many ways it was just as nice as Intermountain Theatres other house in town, the Orpheum Theatre, however, Intermountain played the top pictures in the more ornate Orpheum Theatre, which had a balcony and 258 more seats. A photograph published in The Idaho Stateman in 1978 shows a vintage 1923 facade, which was remodeled, together with the interior of the theatre in 1941 to the plans of architect Slack Winburn, giving a more modern front and marquee so familiar to moviegoers in its later years. Intermountain always kept both theatres immaculately clean and maintained.

Intermountain Theatres was for many years a division of American Broadcasting-Paramount Theatres. The late John Krier, its vice president and general manager, would go on to found the respected box office tracking firm, Exhibitor Relations.

The Idaho Theatre was demolished during the downtown’s urban renewal in the early-1970’s while the Orpheum Theatre is still open and showing movies. A bank and parking lot currently occupies the location.

Information on the organ:
View link

Ron,thanks for adding the Idaho Theatre to the Cinema Treasures list. I grew up in Twin Falls and have fond memories of both the Orpheum and the Idaho. I worked at both theaters while I was in high school. The Idaho did play — rarely — some A-list films, including “South Pacific” and “West Side Story,” mainly because it had a slightly larger screen than the Orpheum (but it was never equipped for stereo sound).
For several years, there was also an “art movie” guild in Twin Falls which would schedule brief runs of films that would normally not play in the area — foreign films that were pretty important during that time period.
There was also another downtown theater — the Roxy — which was independently owned. I think the space was eventually turned into a shoe store, which was highly appropriate because the Roxy was pretty much a “shoebox” size theater. It was just up the street from the Orpheum.
This was during the time when most of the theaters played movies from specific studios. The Orphaum & Idaho played MGM, Paramount, Warners, and Universal-International. The Roxy, for the most part, played Columbia, RKO, Republic and Disney films.
I presume the Orpheum isn’t quite as beautiful as it once was, but I am glad that it has not been razed.
— Ivan M. Lincoln

Photos of the Idaho Theatre from 1968 (one or the other of these is probably kencmcintyre’s dead link):

Also, an undated photo of the Rialto Theatre (possibly Lost Memory’s dead link,) which was across the street from the Idaho, at 131 Shoshone Street East. The Rialto was originally the second Orpheum in Twin Falls, probably renamed when the third Orpheum opened in 1921. Here is is a photo of it as the Orpheum.

Thanks for the newspaper clippings about the Idaho Theatre you just uploaded to the photo section, OCRon. I was interrupted while writing my previous comment, so it sat on my computer for several hours before I finished it and posted it. (Maybe I should have re-checked the page for updates before posting.)