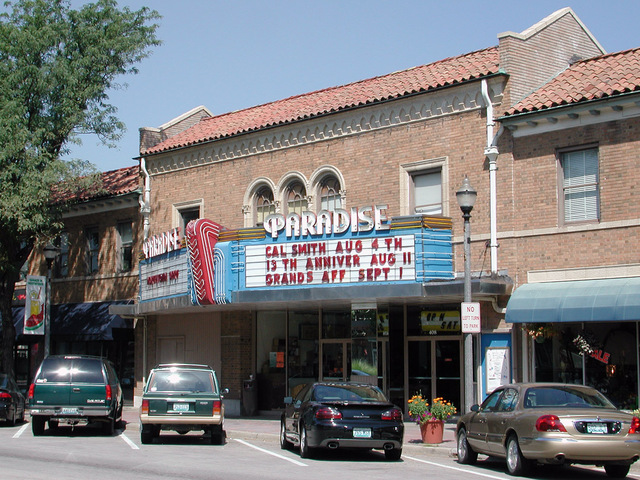 Designed in a Spanish Revival style by noted Kansas City architects Keene & Simpson, the Armour Theatre opened in September 1928 with 650 seats. It reopened as the Center Theater on December 25, 1963.

In 1984 it operated as a live theatre, known as the Paradise Theatre. It was renovated and reopened in February 2008 by the independent Screenland chain. Now seating 300 station seats, with a selection of red leather loungers. The Screenland Armour now serves food and drinks with the movies.

The Kansas City Star reported on August 22, 2007, that the City of North Kansas City has sold the Paradise (Armour) Theater to Butch Rigby, who operates the Screenland Theaters in the area.

Link will probably go dead at some point. Here are highlights:

Under an agreement approved by the North Kansas City Council, Rigby will buy the single-screen theater at 408 Armour Road and adjacent two-story properties, which are part of the theater building, for $600,000.

Rigby, operator of the Screenland Crossroads Theatre at 17th and Washington streets and owner of the Screenland Granada in Kansas City, Kan., said Wednesday that he would restore the building, which the city has owned since 2005.

He said he plans to operate a business â€œvery similarâ€ to the other Screenland theaters."

Rigby has a personal connection to the theater building.

‘â€œI grew up in Liberty and remember coming down to this theater when it was called the Centre Theatre,’ Rigby said.

The theater, which was also known as the Paradise Theatre, was built in 1928 and was one of the Northlandâ€™s most popular single-screen cinemas. The cinema closed in the â€™80s.

Until recently, the theater was a live country music venue known as the Northland Opry.

The city purchased the building as part of an effort to better control economic development along Armour Road. Last year, it hired the Helix/Architecture & Design firm to draw up a feasibility plan for the buildingâ€™s future uses.

The city had planned to renovate the building but put those plans on hold last summer after Helixâ€™s recommendations for restoration came in at $5 million, which was $3 million more than what the city had budgeted.

About that time, Mayor Gene Bruns said he was approached by Rigby, who had been told about the cityâ€™s efforts to restore the theater by a local developer.

Since then, Rigby and North Kansas City have been negotiating a deal.

â€œMr. Rigby is an exceptional person,â€ Bruns said. â€œHe is a proven product who loves theater and has a history of success with these types of projects.â€

The development agreement calls for Rigby to receive Chapter 353 tax abatements over a 10-year period to help pay for the restoration. In order to receive such tax abatements, the North Kansas City Council would have to declare the theater property blighted and schedule a public hearing.

City Attorney Tom Barzee said no date has yet been set for the public hearing. The amount of tax abatements has not been determined, he said."

The Kansas City Star reported on Oct. 27 that the historic Armour Theatre in N. Kansas City, Missouri will receive a tax abatement of $600,000 for renovation of the building—almost half the cost of the restoration.

“The North Kansas City Council this week approved a redevelopment plan for the Armour Theatre building.

The redevelopment agreement calls for building owner Butch Rigby to receive property tax abatements over a 10-year period to help pay for the restoration. To allow the issuance of those tax abatements, the council officially declared the building a blighted property."

Butch Rigby is a local theater operator of Screenland, and known for restoring the historic Granada Theater in Kansas City, Kansas, which is an atmospheric theater designed by the Boller Brothers, then a local firm.

â€œ'I believe very strongly in how beautiful this building is and how it will be an important part of this community,â€ Rigby told the council. â€œI want to make it something that you can be proud of again.'

Rigby operates the Screenland Crossroads Theatre at 17th and Washington streets, which used to be a frozen-food storage facility. He also runs the Screenland Granada in Kansas City, Kan.

Rigby purchased the Armour Theatre Building from the city for $600,000 in August. He plans a $1.4 million renovation that will restore the single-screen cinema, which stopped showing movies more than 20 years ago."

While the Granada Theater restoration was lauded by the local community, the theater struggles to find an audience.

The Armour Theatre was also known as various times as the Centre and Paradise Theater. It seated between 650 and 700 people. It was most recently used as a live performance theater for a country and western music show called the Northland Opry.

Thanks Butch. Everyone is looking forward to having the theater open.

The new marquee looks great. Can’t wait to see it lit up.

Story in the Kansas City Star on reopening of the Armour (formerly Paradise) Theater.

Theatre opened on 6 Sep 1928 with the film,“Warming Up”,starring Richard Dix and Jean Arthur.It reopened as the Centre Theatre on 25 Dec 1963 and was renamed the Paradise in 1984.

Now has 2 screens for movies.