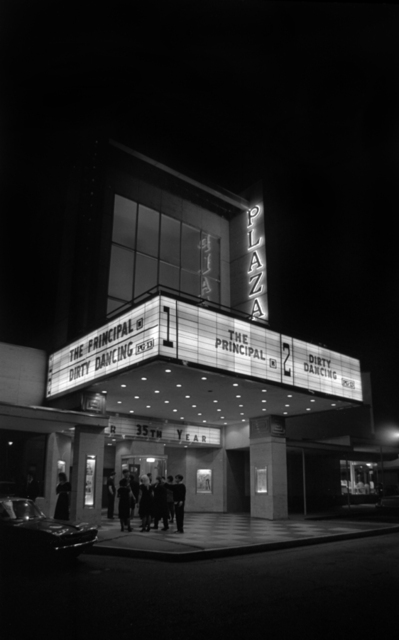 The Plaza Theatre was located in Poplar Plaza shopping center at Poplar Avenue and Highland Street. It was Memphis' first major shopping center and Augustine Cianciolo took a major gamble by constructing a large neighbourhood theatre.

The Plaza Theatre was opened on April 25, 1952 with Joan Caulfield in “The Lady Says No”. All 1,400-seats wer on a single level. The exception was two enclosed rooms on either side of the projection booth, party and cry rooms respectively. It was very successful during its many years as a single screen theatre, even after General Cinema purchased its lease in 1961. It was remodeled and reopened on December 23, 1964 with a reduced seating capacity of 1,200. It was a twinned on June 29, 1973. The Plaza Theatre was closed in 1987.

Bookstar renovated and occupied the space, keeping the front entrance marquee. The curving metal spire on the front of the building was removed and is now on display in a sheltered niche in a courtyard at the University of Memphis. In 2012, it was converted into a restaurant. The interior was completely gutted but the marquee and front window remain.

Gould’s took over the area that was the Starbuck’s Cafe in Bookstar, the theatre itself is now getting ready for the grand opening of Osaka Japan restaurant.

This just in. Went by to look at Osaka Bistro today. No trace of the interior of the Plaza remains but the restaurant is very elaborate and beautiful. Haven’t eaten there yet. The canopy and front window remain intact with the “Osaka” letters where the vertical letters always have been. See the new exterior photos.

Was just over at the University of Memphis yesterday wondering what happened to the acroterion (spire). It never moved at all, it is in a protected niche in a courtyard with the new FedEx Institute building in front. It once faced a yard which was used for the new building and created the courtyard. It is approximately 10 feet high and in very good condition. A new photo when I get it. An image that I will always have in my mind is the contour outlined with a single stroke of white neon which looked like it was hanging in the dark.

New photo of the spire has been posted.

From 1985 to 1987 my friends and I performed “The Rocky Horror Picture Show” in front of the screen in theater 2. We had elaborate costumes, a fully realized light system and built amazing set pieces. We even found an old popcorn warmer in one of the rooms behind the screen that was the size and shape of Rocky’s tank that we painted up and made it look like the real thing. I had just moved to Memphis from Chicago where I had performed as Dr. Frank-N-Furter for many years. My first night there I was getting my make up and costume on in the men’s bathroom when I was approached by two young women who stormed in, Wendy and Caroline. It had been years since anyone had performed in full drag as Frank-N-Furter in Memphis and they were eager to put together a shadow cast, desiring to play as Janet and Magenta respectfully. The show had a low turn out at the time, mostly comprised of William Creswell and his friends. They became instrumental in putting together both a cast and audience lines. Actually, William (Allen back then) was quite funny, energetic and spontaneous. He could get an audience into the show unlike anyone I had seen before.

Within just a few short month’s of our revamping the show we began to sell out regularly and became the hot underground scene of Memphis. During the lead up to the 2 year anniversary of Rocky Horror at the Plaza we were interviewed by the local paper’s film critic, and myself and our Riff-Raff (David G.) were in full costume and make up on the cover of the Arts and Entertainment section. That show featured a live pre-show with comedy skits and musical numbers, and we had Rocky Horror fans in the audience from as far away as Germany who heard of what we were doing through the Rocky Horror International Fan Club.

About a year later I had a bit of a break down and Vince Astor was brought in to helm the show for a while. He did a great job while I recouped, I was grateful for his help.

Whatever one may think of Rocky Horror fans these people had a deep respect for the Plaza Theater, and just about all of them would regularly pay to see movies there all during the week. At times supporting it when business was slow. They were good people, and they were my friends. I miss them all dearly.

Oh, and by the way. I was also one of the theaters projectionist whom William wrote about and yes, the building was haunted back then. But I don’t believe in anything as silly as that now.

I’m hoping someone can maybe help me confirm my foggy childhood memories. I believe I had my first movie going experiences at this theater. At least, I think it was either the, Poplar Plaza, Highland Quartet or the Ridgeway Four.

I’m fairly certain one of the first things I ever saw was PINOCCHIO and maybe several other Disney classics (SLEEPING BEAUTY and DUMBO, maybe) around say 1980 or 1981? I was all of 4-5 so it’s hard to say. I’m like 99% positive I also saw POPEYE (the Robert Altman film) around that same time too. I feel fairly certain that was at the Ridgeway, but may have been the Quartet.

Would love to know for certain if those films played there.

The Plaza theatre opened on April 25th, 1952 and reopened as a twin cinema on June 30th, 1973. “Paper Moon”, which was rated PG was for those 18 and over due to local laws. Grand opening ads posted. 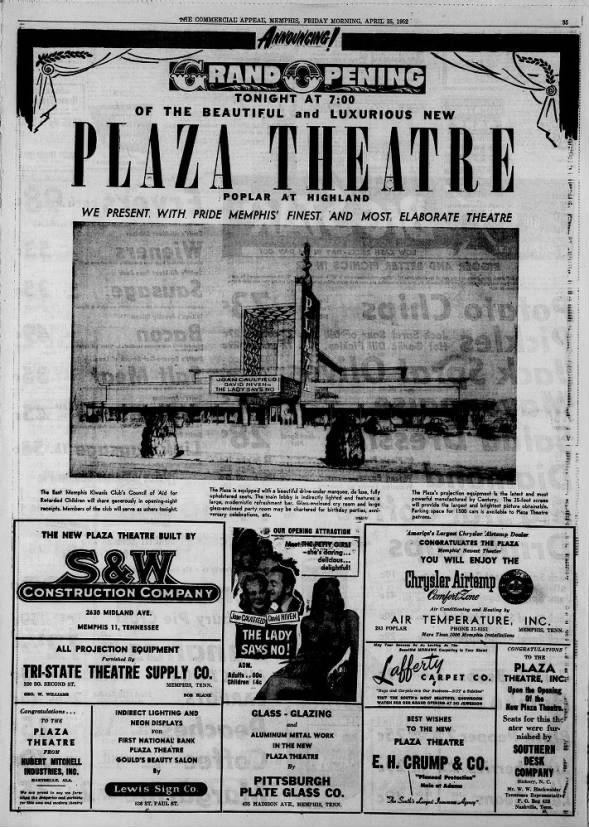