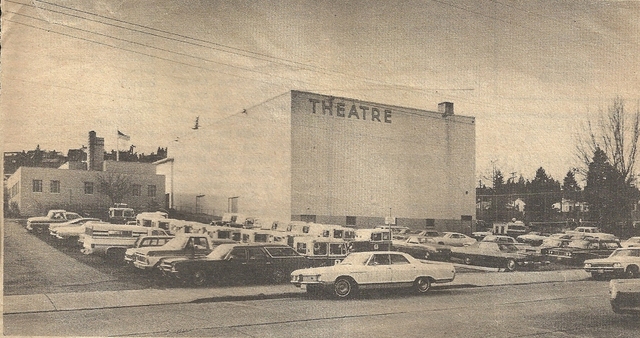 Opened in 1948, the interior was decorated by Anthony B. Heinsbergen in a ‘blooming magnolia’s’ motif.

It closed on 3rd December 1974 and was demolished and a bank built on the site.

The listing should be corrected to read “demolished.” Washington Mutual Bank had the theater completely torn down, so that they could put up their bland ‘brick and mortar’ building.

The Magnolia was built and operated by SRO theaters, who ran it throughout its history. It was a classic neighborhood theater, showing second-run double bills, though, curiously, SRO booked the exclusive road-show booking of Oliver there in 1968, though I have no reason why.

I worked at the Magnolia Theatre as one of its last projectionists. The building won several architectural design awards, which were prominently displayed in the lobby. It had an elevated loge section and a very large screen, covered by a waterfall curtain. Mann’s “State Theatre”, in Olympia, WA. was built along a design similar to the “Magnolia”.

The projectors were modern for the period and were well maintained by the projectionists, SRO’s shop and RCA sound service technicians; Generator-fed Peerless Magnarc lamps, Brenkert projectors and RCA sound heads and amplifiers. The accoustics were excellent and the picture was bright and clear.

Unfortunately, people seem to travel to where the lights are, and patronage wasn’t great during the theatre’s final years… at least as compared to the large downtown houses and the “new” mall theatres. As noted above, the theatre was replaced by a bank, and you’d never know it was ever there.

There used to be a fire station next door (still there?) When someone lit a roll of toilet paper in one of the upstairs restrooms, the firemen were there within a minute of our call!

There is a 1950 photo of the theater on this site. Enter theaters as a search term and browse the photos: