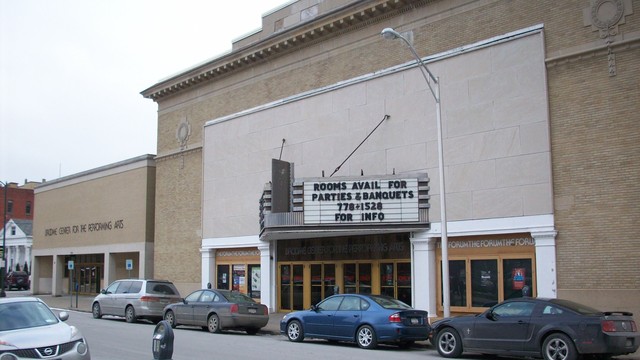 In summer 1975 it was announced that the Capri Theatre was being considered as the future home for the Broome County Performing Arts Center. Also announced at the same time was that a large Robert-Morton theatre pipe organ was being installed in the theatre by local organ enthusiasts.

The Binghamton was apparently also dark through much of the ‘50s, occasionally reopening for special events, and in 1957 a plan was floated to level the floor and turn it into office space. Luckily, it didn’t happen.

The Susquehanna Heritage Area Management Plan of 2009 lists Herbert R. Brewster as the architect of the Binghamton Theatre. Brewster also designed the Empire Theatre in Brooklyn and the Jamaica Theatre in Jamaica, as well as two theater projects in Stapleton, Staten Island, and one in New London, Connecticut, none of which I’ve been able to identify. He also designed the Casino Theatre on Flatbush Avenue in Brooklyn, but it appears to have operated only as a burlesque house.

From this date and for three days (Jan 6-8th), 1930, The Six Rockets, an all-girl RKO acrobat troupe began a three day run at the Binghamton as one of 5 ‘Big Time [vaudeville] Acts’ alongside the Paramount feature, ‘Charming Sinners.’ More info on The Six Rockets at http://www.inesitadasilva.com/?page=Keith%27s-Theatre. A press clipping from the January 8 issue of The Binghamton Press is also available from me in case interested.

I was wondering if anyone had any pictures of the original ticket booth for this theater or any others designed by this architect. Our historical society does not, and I haven’t been able to find very many examples of this architect’s work on line. Cheers-Mr.M

I remember going to the Capri to see Ben Hur, but the best memory was when the Capri was having their grand opening in the 60’s. Back then diagonally across the street was the old YMCA, my dad and I came out to see the grand opening. They had a number of large keg lights and it was as close Binghamton to come to replicating a Hollywood movie premier.

This reopened as Capri on June 9th, 1960. Full page ad in the photo and below

From here you can also link to their facebook page and a virtual tour.