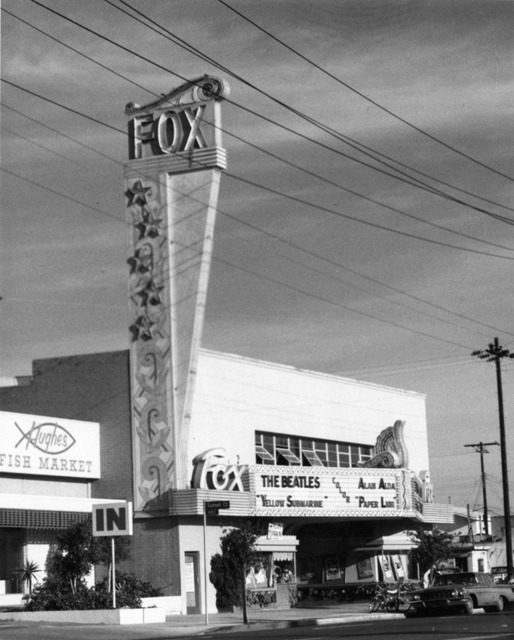 Opened August 17, 1951 with a major studio feature preview: Betty Grable in “Meet Me After the Show”. The opening was attended by George Jessel and stars in person. The Fox Venice Theatre was operated by Fox West Coast Theatres Corp. as a District 4 theater.

A nice Art Deco style theatre, the Fox Venice Theatre showed standard Hollywood fare until the early-1970’s when it became a very popular revival theatre. It has also been operated by National Cinema, Cumberland Mountain Theatres, Rafigh Pooya, as well as the the other chains listed here.

In the 1980’s it turned briefly into an art house, but is now, sadly, an indoor swap meet. Its marquee remains intact. Renovations were planned for summer of 2021.

I was the print inspector and sometimes (inept) projectionist during the theater’s final years. Shows what the place was, that they hired someone to check the prints, repair sprockets, demand a better print if one was no good. There was an editing bay upstairs where documentarians worked on their films.

Let’s not forget the amazing live shows the FV presented — David Bromberg and his big band, Toni Basil with an amazing dance/video/singing show that predates Madonna and Gaga by decades, etc. etc.

Messiah of Evil was filmed here. The scene is available on youtube. http://www.youtube.com/watch?v=a2ayfmkeJGc

My name is Rol Murrow and I was the president of Cumberland Mountain Theatres during the theater’s glory days of the 70’s! Our company turned the Fox Venice Theater into what we called a repertory cinema in 1973. We changed the program almost every day and ran films from the entire history of film, premiered many experimental and alternative films, and ran a program of live music and plays, until we sold the business to Landmark Theaters in 1979.

I also had a film production facility above the theater starting in 1969 and housed our celebrated light show called The Single Wing Turquoise Bird in the studio. There is a scene in Jim Bridges “The Babymaker” with Barbara Hershey, which was filmed in the studio, with sequences from the light show’s work.

Pat Harman has a site called Virtual Venice and I contributed to an article she wrote about the Fox Venice Theater. It is a good read! Enjoy it at

For the record – the Fox Venice theater opened in 1951. A prior theater called the Venice Theater was located on the boardwalk as part of the pier complex, later to be known as Pacific Ocean Pier. I believe that theater burned down, which was why the Fox Venice was built.

Landmark ran the Fox Venice theater for a couple of years after us but ran into financial trouble and sold it to Rafigh Pooya, who played mostly foreign films.

In 1988 inspectors discovered that the acoustical treatment in the theater contained asbestos and summarily closed it. No one could come up with the funding to do the cleanup and restore the building as a theater. A contractor made a deal to do the cleanup and convert it into what you see as a “department store” or “swap meet.” It is basically an indoor version of the vendors' booths you see on the Venice boardwalk.

I hope you enjoy the write-up on the Virtual Venice site above. And there are many, many more wonderful stories about the fox Venice. Google them!

In reading the New York Times article about the website, the first theater mentioned, the Fox Venice, brought back a flood of memories. My father was a district manager for Fox West Coast (the theater arm of Fox before antitrust laws required the studios to divest themselves of their theater chains)in the late 40’s through the end of the 50’s. His district included Venice and the overseeing of the new Fox Venice theater. We were so excited when the theater opened to great fanfare with a weekend filled with events to mark this opening: searchlights out in front for the first evening movies being shown, a Saturday western double bill with an in person visit by Monty Montana a B western movie “star” at the time. The theater was state of the art with a baby “crying room” available for parents, a loge section with cushier seats that required a more expensive ticket, a huge screen and for the time a good sound system. In the days before digital, the films were delivered to the theater by motorcycle riders called taggers who carried the prints from one theater to the next and I remember one time there was great concern that the films hadn’t arrived in time so my father had to go on stage to announce the delay just as the tagger was running in the front door. These theaters had projection rooms with guys (always guys) who ran them that always looked a little strange, usually smoked prodigiously but I remember one in particular that used to let me sit with him while the movie ran while he showed me how it all worked and how he timed the changing of the reels. During one particularly bad rainstorm, the theater lobby flooded in spite of the sandbags at the doors which necessitated all of the fairly new, expensive carpeting having to be replaced. Many more thoughts too numerous to recount about his many adventures managing the other Fox theaters in Santa Monica, Redondo Beach and Manhattan Beach but the opening of the Venice was the highlight. When I drive by I just remember what it was and not what it has become.

I worked at the Fox Venice when it first opened. I didn’t hold a management position, I simply manned the ticket booth and the concession stand for about a year or so. The working conditions were unique and memorable, the crew was amazing and on the cutting edge of art cinema in the US in those days. I believe they were only one of two theaters like this in the US at the time. I knew Rol and he was brilliant and eccentric fun (Hi Rol, if you read this! Remember me? I was Linda’s friend.) I loved everyone there, it was an exciting time and place, one of the best experiences I had living in Los Angeles. Anyone who worked in the projection room knows the secret of the stairway to the stars (That’s how I can tell the real ones from the storytellers). It’s a shame what became of the Fox, I had hoped it would live on as a vital part of Venice culture as it was.

August 17th, 1951 grand opening ad in photo section. There was a strike: http://latimes.newspapers.com/clip/6128268/fox_venice_strike/

Orson Bean mentioned this theater, when he did the Tonight Show with Johnny Carson (First Aired: Sep. 23, 1976) also with Orson Welles; And actress Carol Lawrence and actress Kay Lenz.

Renovation in the works.