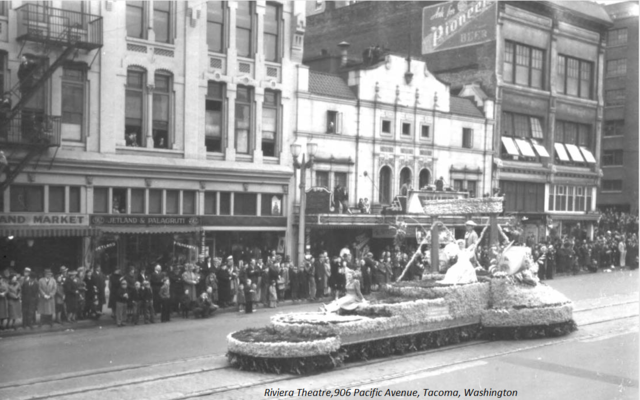 Originally the Liberty Theatre. The Regent Theater opened on November 19, 1916. It was demolished and the Riviera Theatre was built on the site and opened on July 1, 1929 with William Boyd in “High Voltage”. Seating was provided for 426 in the orchestra level and 180 in the balcony. It was equipped with a Wurlitzer theatre pipe organ.

I just found a record through the Tacoma Public Library that says the Liberty Theater was at 906-08 Pacific Ave. in 1918 and in the 1920s.

Another site I looked at said this theater was also known as the Regent.

So far, it’s been the Regent, Riviera, Liberty and Capri.

The Tacoma-Pierce County Buildings Index says that the Riviera Theatre was built on the site of the former Liberty Theatre. It was new construction, as the Liberty building had been erected as a commercial structure in 1884 and was obsolete. The Riviera was opened on July 7, 1929 in a building designed by architect Silas E. Nelsen.

This house was next door to the building which had housed the first Tacoma Pantages Theatre, which later became the Victory, but was closed by late 1924, five years before the Riviera replaced the Liberty.

This photo of the Capri Theatre from the Tacoma Public Library is dated c.1966. Another photo, dated c.1963 shows the house with the Riviera name still on its marquee. The Index says the name was changed in 1964, and the building was demolished as part of an urban renewal project in 1969.

This photo depicts the entrance to the Liberty Theatre in either 1926 or 1927 (the years of the two bouts between Jack Dempsey and Gene Tunney), so not too long before the house was demolished to make way for the Riviera.

The Tacoma library web site has been having problems all night, so the links in my previous comment might not be displaying anything. If the library doesn’t fix its problems soon I’ll just repost the comment without links, and put the library on the list of web sites I never link to.

I watched this theatre as it was demolished during the summer of 1969. I worked at Harta Studios which was acress the street at 907 Pacifuc Avenue.

this opened as the Regent theatre on November 19th. Grand opening ad posted. 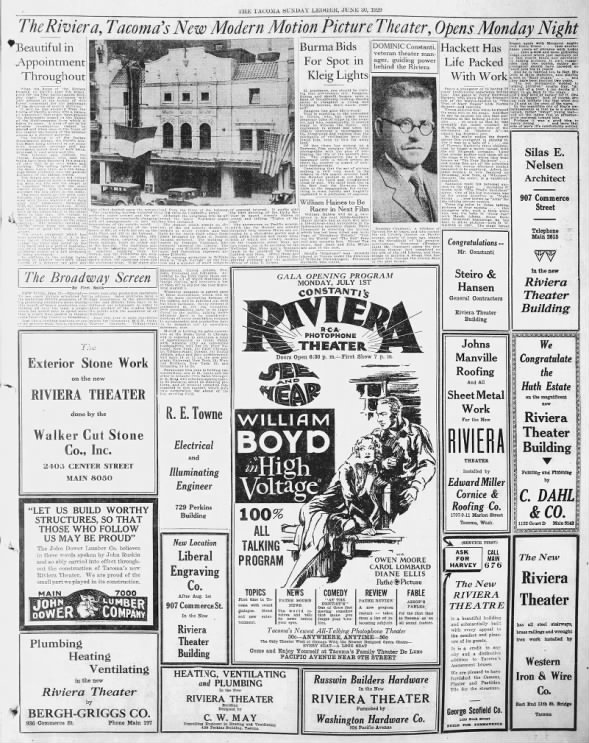 This reopened as Capri on May 29th, 1964 with “The Pink Panther”. Another ad posted.