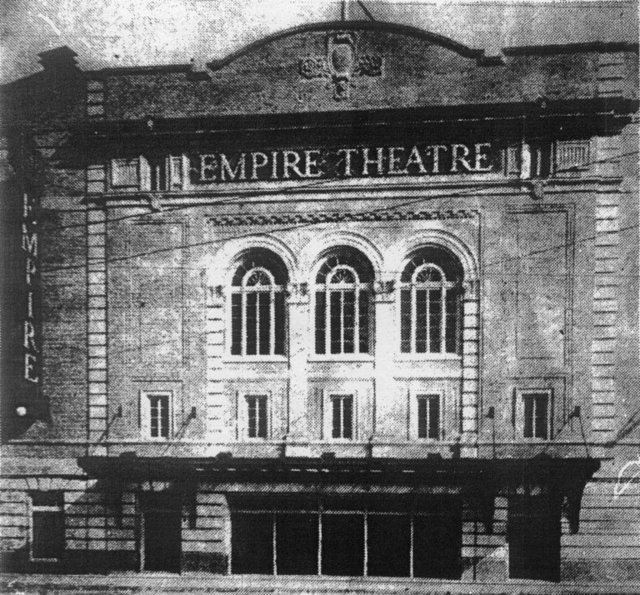 Opened in 1915 as the Empire Theatre, it played vaudeville only in the early days and had an original seating capacity of 2,300.

From the 1930’s it came under the management of Warner Bros. Circuit Management Corp. and was re-named Warner Theatre.

It was demolished in 1976 to make way for a bank building.

The MGM Theatre Photograph and Report form for the Warner Theatre on Lawrence St. has a facade photo taken in May 1941. The theatre had a long distinctive marquee with a vertical sign at the left corner. It had a beautiful classical facade. The Report states that the theatre had been playing MGM films for over 10 years; that it was over 15 years old; that it was in Fair condition; and that it had 1132 seats on the orchestra floor and 895 in the balcony, total: 2027 seats.

The Empire (Warner) is listed in the 1928 Film Daily Year Book as being operated by Toomey & DeMara who also operated the Colonial, Empire, Palace and Premier in Lawrence.
Barry Goodkin

I remember going to The Warner in the early to mid 1970’s. This place was great it showed all the Disney movies of the era as well as having double features. The screen had beautiful red velvet curtains and when the theatre was full they would open up the balcony. In order to purchase tickets you had to wait outside and if the movie playing was popular you waited quite a while. However once the Showcase Cinema opened a few miles away with 4 screens at that time The Warner soon closed. I no longer live in that area but I’m told the downtown district is going through a revitilization wouldn’t it be cool if someone opened a nostolgic single screen theatre in this area. Lawrence was very well known in the 1950’s and 60’s for all the theatres in the city all which have long closed

I remember the Warner theater in Lawrence well into the ‘70s. My friend Frank Jones was one of the last projectionists there. I only remember going there a few times though. In 1974 I worked at the Arlington Trust Co. that was diagonally up the street from it on the corner of Lawrence and Essex St. That summer there were a lot of people picketing and protesting the place because they were showing x-rated movies, “The Devil In Miss Jones” and “Deep Throat”. It was the first time in years though they had to open the balcony to accomodate the crowd. It closed not long after that though. Even with sub run movies and bargain nights at $1.00 they couldn’t compete with the likes of Sumner Redstone and the multiplexes. There was just no filling the large houses and even at half the capacities, the mutiplexes had to get smaller later to survive.

I believe though that Napoleon DeMara may have actually been the owner of the theater and not the manager. He was the uncle of Fred Demara, the great imposter and was a Lawrence businessman. He, along with three other partners, built and opened the Hampton Beach Casino Ballroom in the ‘20s at Hampton Beach, NH

Here are a couple of photos and some of the site today. I hope to find and post better ones at some later time
http://www.pbase.com/jroy/warner

I added another photo today, check that link above again It was actually demolished to make way for a parking lot for the bank located next to it.
Essex Savings then Sovereign today

I added an entry for the Nickel theater which was the theater on the site prior to the Empire/Warner. see CinemaTreasures.org ID: 32127