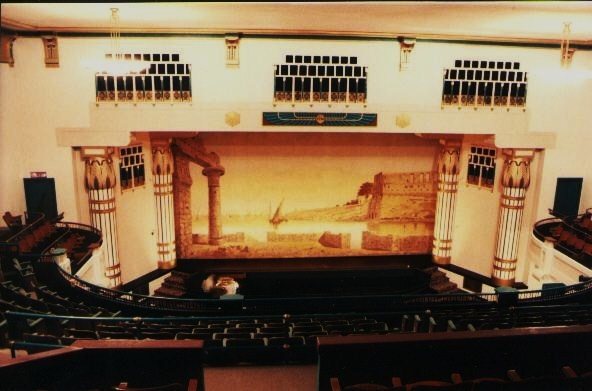 Tacoma’s Temple Theatre was built in 1926, designed by architect Ambrose J. Russell, the contractors were Biehn and Chalmers; the theater officially opened in October 1927. This theater was originally known as the Heilig Theatre and was renamed Hamrick’s Temple Theatre in 1931. Temple Theatre had a seating capacity of 1,800 people. The building served as both a Masonic temple and a theater. The building is Greek in style with interior Egyptian detail.

Upon the theater’s opening, the “Temple of Minerva” backdrop from the Tacoma Theater was presented to the new theater. The backdrop was painted by artist Thomas G. Moses in 1889 and had hung in the Tacoma Theatre for 37 years.

The Temple Theatre advertised they had the “widest proscenium arch of any theater or hall on Pacific Coast”. Throughout the years, the Temple Theatre had a number of movie stars making special appearances, including Tallulah Bankhead and Lucille Ball.

In 1954, CinemaScope was installed at the theater.

The theater’s original 2/9 Kimball organ remains today and is original in all respects, being one of only five original installations in the State of Washington.

Movies are rarely, if ever, shown at the Temple Theatre. However, the site is still used for live programs, like concerts and wrestling.

The Landmark, with its numerous conference rooms, is one of the most popular places in Tacoma for wedding receptions, luncheons, school dances and the like.

I’m glad this one is finally listed.I enjoyed going to this venue in the early and mid-80’s.I remember watching a lot of films here in the grand auditorium.My kids liked the grand scale of the place.It was so huge compared to the fancier,but much smaller Roxy-Panteges.It seemed to attract a lot of the military crowd,drawn by the sometimes double features.

I remember the big hoot during the showing of Final Countdown when the Tomcats splash the Zeros.The cheers and yells were wall-shaking from the mostly military crowd.They were always fun to watch an action flick with,because they were so demonstrative.Now that my tiny sons then are now in Iraq,the memories are especially touching.

Saw many films here. In it’s last hurrah as a first run theatre operated under “Galaxy Theatres” it showed the James Bond flick “Octopussy” in the summer of 1983. Later reopened as a second run under “Star Cinemas” it had a few 70mm second run engagements including “Dune” and “2010”. Presentation was impressive.

Boxoffice magazine did a story about the theater being remodeled in their January 8, 1949 issue:

Clickable link to the Boxoffice article KenLayton cited. The article says that the architect for the remodeling was Paul Carlsen. Though it calls him a “nationally known theatre architect” I can find nothing else about him on the Internet.

The page also needs a credit for the original architect, A. J. Russell. Ambrose J. Russell had an interesting life and career. Born to missionary parents in India, he studied architecture at the University of Glasgow and at the Ecole de Beaux Arts in Paris. On emigrating to America, he worked in the office of H. H. Richardson, then in Worcester, Massachusetts, Kansas City, and St. Louis. He practiced in partnership with his former schoolmate Bernard Maybeck for a while before settling in Tacoma in 1892. Alone or in various partnerships he designed a number of notable buildings in the northwest, including the Governor’s mansion in Olympia, Washington.

Here is a 1947 view of the Auditorium before its modernization.

This was the finest theater in Tacoma when I was a kid in Fircrest in the 1960s. I saw “The Sound of Music” and “Lawrence of Arabia” here in first run. It had velvet ropes, uniformed ushers with flashlights, the works. Young people today have no idea what a great theater was like. Glad it still exists.