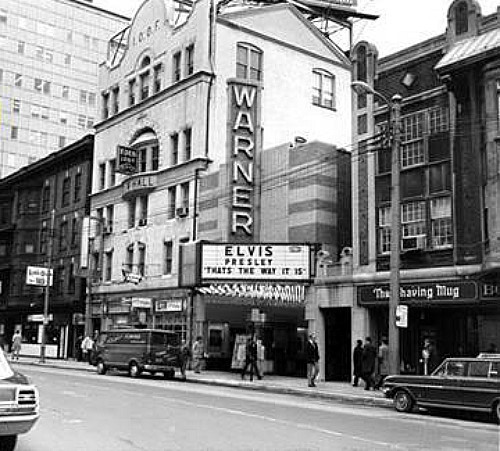 The Warner Theatre was the largest and most lavish in the State of Delaware. It opened on February 8, 1939.

It closed in December 1976 and in the summer of 1977 it was announced that the auditorium section of the building would be demolished and turned into a parking lot.

According to researh by Craig Morrison and Irv Glazer the architect was Wallace E. Hance

In the summer of 1973, Blue Oyster Cult and Peter Frampton played a live concert here because all the venues in Philly were booked. I was sitting in for the manager that week, and Frampton used my office for a dressing room. Two weeks later we held Wilmington’s first All Night Movie Horrorthon, including Night of the Living Dead and 3 other horror films. Started at midnight and lasted all night. But the biggest hit we had was when Tom Laughlin rented the theatre for his four-wall reissue of BILLY JACK which sold out almost every show. What a summer that was!

according to this ad iam posting. of suspiria is from Aug 26th 1977.. so it didnt close in decmeber of 76…look in photo section..

From a Wilmington Fire Department photo page, Engine Company No. 8 @ Warner Theatre. No other info.

The September 17, 1938, issue of Motion Picture Herald said that David Supowitz had acted as consulting architect for the Warner Theatre, then under construction in Wilmington.