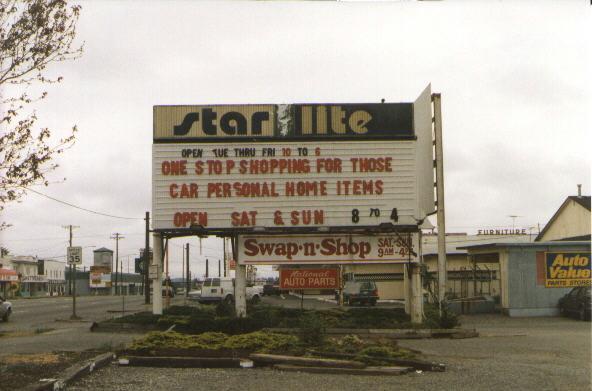 Star-Lite Park-In Theatre was built in 1948 by E. Chester and Sue Nilsson and Charles L. and Cora Theuerkauf. It was the second drive-in theater built in Tacoma. Its original screen measured 39 feet by 54 feet. A newer, larger screen went up later.

The theatre opened May 26, 1948, showing “Golden Earrings” with Ray Milland and Marlene Dietrich and “Adventure Island” with Rory Calhoun and Rhonda Fleming.

It closed as a drive-in theatre in 1996 and operated as a swap meet site. The giant screen stood, but it was demolished in June 2019. An Amazon warehouse was built on the 3-acre site

About a month ago, Channel 7 (KIRO-tv) did a news story about the City of Tacoma shutting down the swap meet for a while. Seems the business owners had no business license to operate a swap meet. Also sellers are required to buy an individual swap meet license too!

Thanks for the pictures, I have it being owned by William Forman.he owned Several drive-ins in this state and it parked 550 cars.

My husband and I met at the Star Lite Drive-In. He worked the field as a bouncer, I worked as a cashier both in the booth and the snack bar. We worked for Al and Joanie Larpentuer back in 1970. Those were fun times. We don’t have pictures, just lots of memories. We married in 1971 and continued to work there until our family started. Today we have taken a room in our home and named it the Star-Lite Theatre. Theatre seats from 6Ave. theatre which we recovered and black and maroon drapes which I made. This doesn’t sound much like the Star Lite Drive In but it is a lot warmer. And you can pause for the cause without missing any of the film. Thanks for the pictures, now I have something to hang up that is a part of the history of the “STAR LITE DRIVE IN”

Any idea as to when the wider screen was added? The original, which is still partially visible behind the existing screen, appears to be curved rather than flat.

The News Tribune of Tacoma published a short video yesterday of a crew preparing to demolish the Star-Lite screen tower to make way for a distribution center. 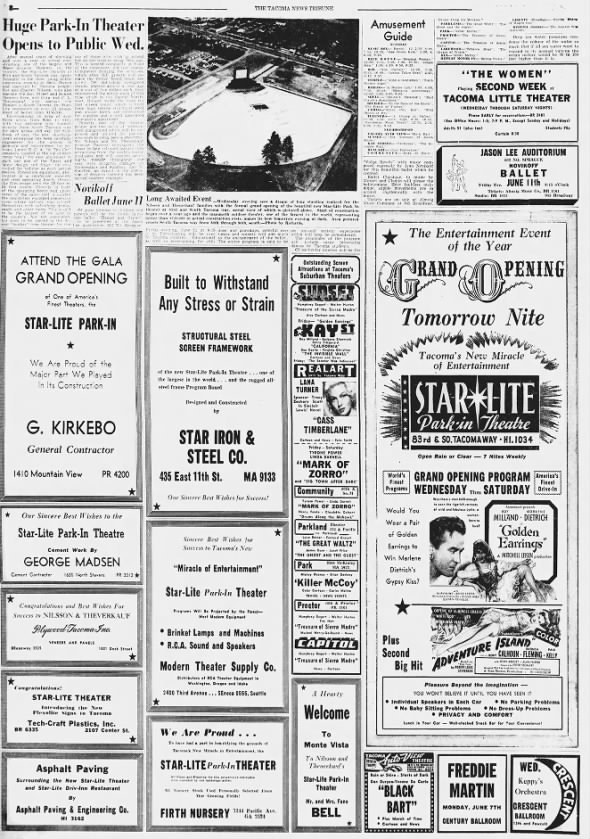