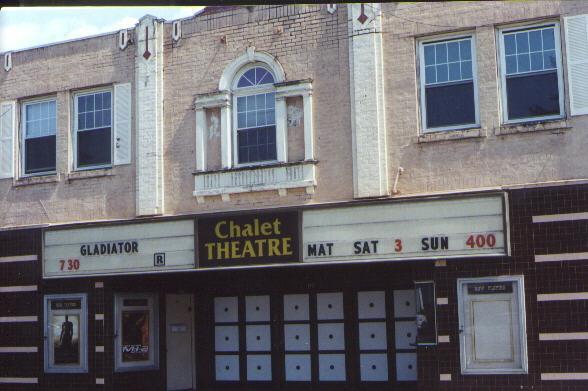 The Chalet Theatre was built in 1917 and originally served as home to the American Legion. In 1947, it was converted to a movie house. In 1977, Ken Kerr and his brother purchased the theater.

Kerr has made some changes over the years – modernizing the projection system, adding Dolby surround sound. In 1993, he replaced the original seats, moving the rows farther apart to add more legroom. The theater, which seated 582 when Kerr and his brother bought it, now seats 460.

The theater has a high ceiling and the original tapestries. Kerr pretty much takes care of every aspect of the popular theater. What an asset to fans of old theaters! By summer of 206 it was presenting live performances.

I love the Chalet Theatre. My mother worked there when she was younger and that’s where she met my dad. They lived in the appartments above the theatre. It’s also where I had my first kiss!

The theatre is wonderful, with red velvet curtains and lots of beautiful touches. It’s also the only affordable, first-run theatre in 100 mile radius!

The Chalet is one of 2 local theaters in Enumclaw, but is larger and a bit nicer of the two. They have affordable food (very rare to find these days) and cheaper tickets then your standard chain theater. I try to visit whenever possible, its a very nice place.

First run movies, cheap ticket price, cheap popcorn, and small town appeal. It’s a bit cold and stark inside, but still warm and fuzzy compaired to the big chains. Worth the trip to Enumclaw.

Here are a couple of lines from a May 17, 2010, article in the Enumclaw Courier-Herald by Wally DuChateau:

“There were two movie theaters, the Avalon and the Liberty, owned by Gene Groesbeck. He showed films one or two months after they had opened in Seattle and had, more or less, exhausted their runs in the city.”

An E. W. Grossbeck [sic] of Enumclaw was listed as a recent visitor to Seattle’s film row in the January 6, 1917, issue of The Moving Picture World. This was probably Mr. Groesbeck, who is also mentioned in a reminiscence by Jim Merritt, who grew up in Enumclaw in the 1920s and 1930s:

“The Liberty Theatre was the showplace for all the Silent Movies. A large theater organ was played to accompany each feature in underscoring the mood of the movie. Later, after ‘Talkies’ arrived, Mr. Groesbeck, the local theatre owner, opened the Avalon Theatre. There was a change of shows about three times weekly unless, of course, a big hit came to town and would run five days instead of the usual two or three. Short subjects and newsreels were a part of every movie program in those days. Every Saturday there was a kids' matinee, which included ‘serials’ that ran from week to week.”

The 1913-1914 edition of Julius Cahn’s guide lists one theater at Enumclaw, the Opera House, a ground-floor theater of 600 seats, managed by E. W. Groesbeck.

Another Courier-Herald article by Wally DuChateau here clarifies the history of Enumclaw’s theaters. It says that Gene Groesbeck built the Liberty Theatre around 1920, built the Avalon Theatre in 1929, and that outside interests opened the Roxy Theatre in 1949. The Liberty was on the site now occupied by the Police Department, which is next door to the Chalet, and the Avalon near the corner of Myrtle Avenue and Cole Street (it was still in operation at least as late as 1955.) The Roxy is the house that became the Chalet.

A 1948 Motion Picture Herald item mentions the “…Roxy in Enumclaw, a 750-seat house, built this year.” The facade of the Chalet obviously dates from the 1920s, not the 1940s, so MPH was wrong to say that the Roxy was “built” in 1948. It must have been converted from the former American Legion Hall at that time, as our introduction says.

As for the vanished Liberty, it’s possible that it was actually the old opera house, renamed around the time of WWI, as were quite a few theaters. We know that Eugene Groesbeck was managing a theater in Enumclaw at least as early as 1913, and involved in movie exhibition there at least as early as 1917, and that he operated the Liberty Theatre in the 1920s and 1930s, and possibly in the 1940s.

Did this theater convert to video projection yet?

Ken: Digital projection and sound equipment was installed in the Chalet Theatre in June, 2013.

Ken Kerr, who had operated the Chalet Theatre since 1977, passed away in December, 2012, and the theater is now operated by his nephew, Charles Kerr.

Functions should include: Live performances.