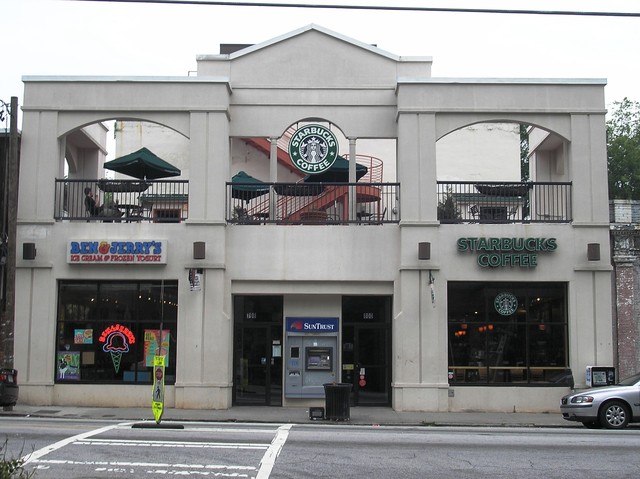 The Hilan Theatre was opened October 9, 1933 with Slim Summerville in “Her First Mate”. During a recent excursion to Atlanta to get information and photos of the area’s theatres I was a bit disheartened to discover that the Hilan’s distinctive marquee as well as its entire North Highland Avenue facade had vanished. According to folks in the area, this former Storey Theatre is still there but none could account for its current condition or future.

A few years after the theatre closed in 1969, it became the home of the Metropolitan Community Church. Currently a bank, ice cream parlor and coffee shop reside in the space once occupied by the Hilan’s entrance and lobby.

thanks Ralph, Most all of us had a “Biggers”. LOl.

I worked there in the concession stand in 64. Remember popping popcorn in the bathtub upstairs and bring it downstairs. I also remember the candy was out in the open and had to watch people like hawks to keep them from stealing. Remember when Hard Days night played and sat up in the projection booth and watched the girls screaming. Also learned how to change reels and watch for the dots to appear. I Also worked a couple shifts at the Emory

check the top floor of the main branch of the fulton county library. you will have to look around a bit but there is a wealth of material there literally rotting away.

Thanks… Next time I am in Atlanta I will check. I live in Virginia now. Was trying to try something online

During my 16 month stay in Atlanta (1964 and 65) I was able to attend this theatre only once. I saw a black and white film, “The Hill”, a good one, directed by Lumet and starring Sean Connery just after “Dr. No”, and Harry Andrews. It was not one of the movie palaces but it was a nice neighborhood theatre, just around the corner from the Plaza theatre.

I worked there during that time… memories

Only two blocks from the better known Plaza Theater, the Hilan held its share of devotees during my time as a nearby Poncey-Highlands resident in the early ‘70s. I recall that after its closing, the building was home for a non-denominational church before its ultimate conversion to multiple commercial spaces. Along with adjacent Atkins Park Deli, Fleeman’s Pharmacy & Fountain and the public library, the Hilan was part and parcel of an eclectic neighborhood that would eventually give way to the gentrification trend of the late'70s thru '80s. 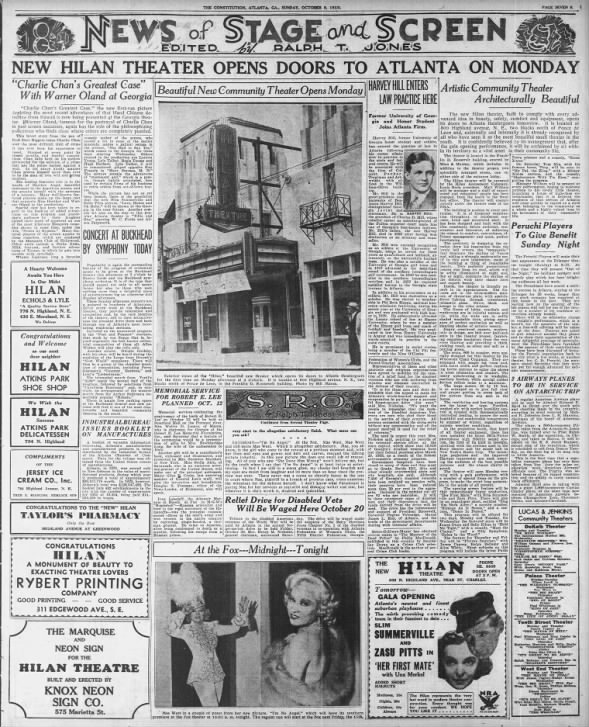 Currently operated by the City Church Eastside, the interior has had continued modification and is a far cry from its original layout. Some of the original lines can be recognized but the floors have been leveled off and raised up with a modern lobby and bathrooms added accessible at the end of a long hallway from the sidewalk. It has served as a venue (along with the Plaza Theatre and others) for the annual Atlanta Film Festival for the last couple years. Some photos of the interior are available on