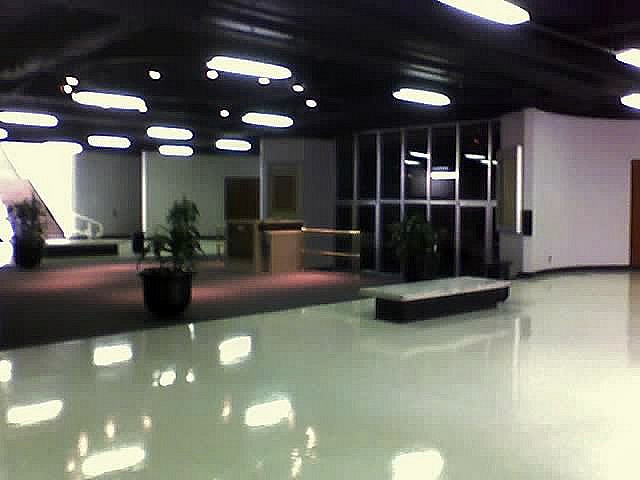 The Georgia Theatre Company’s Greenbriar Mall Theatre was heralded as the showplace of the south when it opened on October 15, 1965 with John Wayne in “The Sons of Katie Elder”. Seating was provided for 1,040, with 760 in the orchestra and 280 in the loge (smoking section). It retained it ‘showplace of the south’ status at least in the south Atlanta area until it was twinned around 1975. The auditorium was split down the middle with what must have been a thin sheet of drywall covered by drapes. This resulted in a large theatre with two tiny screens with a horrible sound system that permeated the thin wall between the two auditoriums. It was closed in 1996.

Loews later built a Magic Johnson theatre on the mall site that J. C. Penny once occupied. Does anyone know the current status of the original theatre?

Last time I was at Greenbriar it had been walled off. The last operator had it going until just before Majic opened. Remember when Georgia Theater ran it and it’s off-site sister the Westgate Triple?

The Magic Johnson Theater is actually outside the mall. JC Penney closed and became an Uptons, then a Burlington Coat Factory.

I remember going to the Greenbriar theater quite a bit during the 70s and early 80s. Like Stan said, it was not the same after twinning the auditorium.

well.. first, you’re a bit wrong on your dates— the Greenbriar opened in 1965 i believe… I was the first employee after the manager, Randy Haynes.

I had been working for about a year at the Westgate Cinema across Campbellton Road when Greenbriar was built, and as soon as I heard about it, I applied. I got the job as head usher and got to wear a pukey-yellowish-green colored blazer with a “Georgia Theater Company” patch on the pocket instead of an orange/yellow “monkey suit” like the rest of the ushers.

Opening night was the Atlanta premier of the John Wayne movie, “Sons of Katie Elder.”

There was still lots of leftover contruction material around, and I managed to “liberate” enough of the orange leopard-spotted carpet to carpet my ‘55 chevvy with it!

And yes, it was magnificient as a large single-screen!

Smoking in the balcony only!

I worked there for about a year until I graduated high school and left Atlanta for college at UGA.

In later years I found myself at Greenbriar Mall again, after it had started it’s decline, but kept myself from going downstairs to visit the theater… i preferred to remember it from its better times.

Edwards and Portman were the architects of the Greenbriar which had a 27'x45' CinemaScope screen with 1,040 seats at opening with 280 of those seats equipped with ashtrays in the smokers' loge.

It was actually the mid 1970s when the auditorium was split. I remember seeing Carrie here after it was divided in half.

Announced today that Macys will be closing at Greenbriar. I would guess that the end is near for Greenbriar as a viable shopping destination. I don’t know if there is a demand for the land at this point but with no anchor I can’t imagine it can escape the fate of Shannon Mall, Columbia Mall, etc.

It will probably turn into another South DeKalb. They had Rich’s and Penneys as their anchors. Was the second anchor at GB a Penney’s? By the time I first worked at the theater in the mid 80’s there was a Burlington Coat Factory there. I managed the theater at SD in the mid 70’s, shortly after the mall opened. It was very neat, clean, and well run. By 1985 when I last worked at SD it was certainly on its way down. GB however was another story. In 1985-88 I could walk through the mall on my way to the theater and feel like I was in the early days at SD. They had a very active Merchants Association and the mall management was strict in enforcing the rules about store appearances. No cheap looking handmade signs or banners allowed and the mall area was kept spotless.

In the late 80’s a big Cub Foods store was built in the parking lot followed by the 12 screen Sony / Magic Johnson movie theater next door. Both of these places drew masses of people but by the mid 2000’s they were closed up. I think that the huge big box shopping complex at I-285 and Cascade, which had its own movie theater as well, was a big blow, much more so than Shannon Mall turned out to be. I am surprised to find out that the Macys, which is what the Rich’s was before the name change was still open.

Shannon Mall was carted off to the landfill years ago after sitting empty for years before that. SD is still standing but the last time I was there, about 2005 it looked like a third world flea market which is what Northlake resembled the last time I was there in 2015. That may be what happens to GB. At Northlake, which never had a movie theater but did have a GCC triple and an AMC 8 in satellite strip centers, Emory University has bought the old Sears location for offices and a new owner has plans to turn it into a live, work, play, shop complex. The Gwinnett Place Mall, which had 36 screens, all closed now of course, even pre Covid, in four different theaters in its satellite centers has recently been purchased by the county but no word on what the plan for it is. Meanwhile, North DeKalb, Atlanta’s first enclosed mall soldiers on. The latest plan for its demise, a Costco centered complex like the one at Town Brookhaven was denied by the county.

Finally, in years past there were some nice pictures in the photo section of this page that are now gone. They were from the Headland High School Yearbook of 1969 or 70. Several were group pictures taken in front of the theater entrance. They were dated by the presence of Butch Cassidy one sheets in the frames that are still intact in the surviving pictures.

Yes, it was a Penney’s back in the day. I guess the Sears for that area was the one at West End. In the pre Cumberland Mall era your choice for a real mall for those of us on the NW side of town was Lenox or Greenbriar, today that seems ridiculous. We had our stand alone Sears. Penney’s, Rich’s, etc. But no mall. My last visit to Greenbriar would have been just after the 97 holiday season and it was pretty rough. When mall security is dressed in black, traveling in pairs both with assault rifles in hand at 10AM on a Saturday it doesn’t say nice suburban mall, bring the family. It certainly didn’t make you want to sit in a dark room with a bunch of strangers.