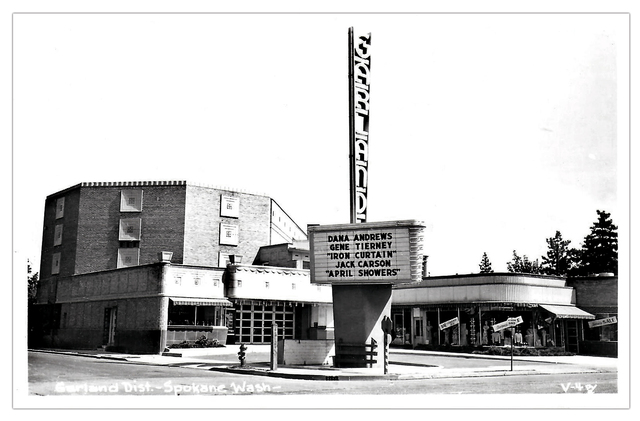 When the Garland Theater opened in November 1945 with just under 1,000 seats, it was the premier movie house in the west. According to the Spokane Sentinel newspaper, “There is nothing like it on the Pacific coast, even in Los Angeles, it is 20 years ahead of Spokane”. One of the main attractions for youngsters at the opening was the snack bar, said to be “an innovation in the field and an import directly from Hollywood.” The Spokane Daily Chronicle of 11/9/1945 stated “Garland Theatre to open November 21” It lists Funk, Molander & Johnson of Spokane as the architects. (The death notice for Arthur Harvey Funk , architect, in the Spokane Daily Chronicle on 9/26/1986, cites the Garland Theatre as one of his notable projects.)

Showing on opening night was a double feature: “It’s a Pleasure” (starring Sonia Henie) and “Double Exposure”. The luxurious lobby was filled with baskets of flowers from studio well-wishers along with congratulatory telegrams from Bing Crosby, Carry Grant, Dorothy Lamour, Bob Hope, Ginger Rogers and Eddie Cantor. The lobby floors were covered in rose colored carpet, brown oak walls and a purple and lavender ceiling set above center columns of dark purple tile.

The large auditorium featured stadium-style seating and an original capacity near 1,000 (currently 630), as the seats have gotten larger and the rows were extra-wide, designed so that people could leave their seats without disturbing others. The walls were powder blue and Italian red and said to feature “germicidal lamps” to keep the air purified.

An innovation in marketing at the time was to have a record and gift shop at the theatre, and the Garland was no exception: as the music faded from the screen, a slide was shown informing patrons that they could purchase the music they just heard right there at the theatre.

The Garland Theater closed briefly in the early-1960’s with the owner saying that it “had everything but customers”. According to the Spokesman Review it survived a brief period as an X-rated movie house and then stood empty from May 1986 to November 1988, when Don Clifton reopened it as the first discount theater in Spokane. The concept caught on, and 1995, the Garland Theater marked its 50th anniversary with a 3-D showing of “Creature from the Black Lagoon”.

Katherine Fritchie purchased the theater in 1999 and has been working to restore the theater to its original splendor and modernize the sound and projection systems while retaining the family-friendly atmosphere and price.

The Garland Theater has a great web site with lots of photos and details.

Somehow I never got back to this page until now. The theater’s web site doesn’t give me any problems anymore.

I was surprised to see among the photos there one showing that the Garland’s main level seating was continental style, with the aisles confined to the sides of the auditorium. That was a very rare configuration for an American movie theater of the period- or just about any period. In fact the only movie theater I’ve ever been to that had continental seating was the Hastings in Pasadena.

This place looks like a real gem. I especially like that art moderne lobby. If I ever get to Spokane, I’ll be sure to check it out.

A couple of years after building the Garland Theatre, original operators Inland Theatres were making plans for a similar project encompassing a theater and shops at an unspecified location in Spokane, according to the May 31, 1947, issue of Boxoffice Magazine. As the new project was to be designed by Spokane architect G.A. Pehrson, it seems possible that the Garland had also been designed by him.

Gustav A. Pehrson, a native of Sweden, practiced architecture in the Spokane region from 1913 to 1968. One of the leading architects of inland Washington during the era, he was best known as the chief architect for the design of the Hanford Engineer Works Village at Richland, Washington, a project that, by 1950, had become a town of 22,000.

If it turns out that the Garland was designed by Pehrson, that would considerably increase the theater’s historic significance.

There’s also a chance that the Pasco Theatre was designed by Pehrson.

I was told that the Garland was designed by the same architect that designed the Empire in Tekoa, Washington; the Rena in Kellogg Idaho, the Bungalow in St. Maries Idaho, and perhaps others.

If Tom Hutchinson’s source is correct, then Bjarne Moe was the architect of the Garland Theatre. It would not be surprising for the Garland to be a Moe design, as he was probably the most prolific theater architect in the northwest during that period.

In various issues of Boxoffice Magazine, Bjarne Moe is named as the architect of the Bungalo Theatre in St. Maries and of the Empire Theatre in Tekoa. An item in one issue of Boxoffice strongly suggests that he designed the Rena in Kellogg.

A few other theaters designed by Moe are listed in my December 29, 2008, comment on the Cinema Treasures page for the New Ritz Theatre in Ritzville, Washington.

It good to see that its still open and looks the same.Cool looking Marquee and tower.

From the late 1940s a photo of the Garland Theatre in Spokane.

Finally a place where I can try to contact Tom Hutchinson