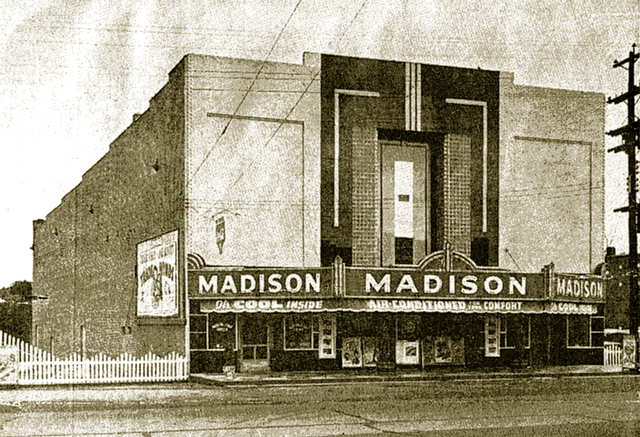 The Madison Theatre opened April 21, 1938 with John Boles in “Romance in the Dark”. Although very little of the original interior of the theatre remains, the exterior of the Madison Theatre is still pretty much intact and quite nice. After closing as the movie theatre in 1950, the Madison Theatre became a great art gallery and a very popular spot. Future plans included a 2,500 square foot auditorium, in which it was hoped to include some elements of the original theatre. Unfortunately this didn’t pan out and the building is now used for religious services.

The Madison Art Center has plans to restore the facade of the building to its original appearance. Glass bricks are being sold to patrons for a $100 donation which will be installed on the front of the building to replace the original ones, now covered with aluminum siding. Donated glass bricks will have the donor’s name etched in the glass and the donor will receive a matching brick for a keepsake. The interior was divided into two floors when it became a retail furniture store. Upstairs storage areas reveal a few hints of the original 1930s decor, with Art Deco moldings and ceiling treatments. It’s easy to see where the original balcony and projection room were located.
Dinner theatre fare has proven popular enough to warrant the future addition of a working stage in the main floor gallery and possible classic film screenings but the gallery will still occupy most of the building on both floors.

“The ‘Grand Opening’ of the new Madison Theatre on 21 April 1938 brought to the growing village ‘Tennessee’s newest, most modern theatre.’ For admission charges of 10Â¢ and 20Â¢, patrons enjoyed ‘new floating comfort seats’ in the ‘correctly air conditioned’ auditorium. Perhaps as an innocent portent of what would come to pass, the first feature film was ROMANCE IN THE DARK, with John Boles and Gladys Swarthout.”

The book also includes a few photos featuring the Madison Theatre from a distance.

This is great! Please keep us posted on how this project is going.

The latest news is that the Madison Arts Center has closed. The property owners are considering options for use, including a possible church or home for abused women. The glass bricks mentioned above were indeed installed before the Arts Center went belly-up. I’m hoping some investor will swoop in and save the building before any further remodeling takes place.

The property is currently listed for sale at $650,000. I shudder to think what will become of the building. It’s really in great shape, inside and out, as far as I can tell.

The Madison Theatre building has been bought by the Seventh Day Adventists and will be a multi-use facility for classes etc. Ironically, the glass bricks that run up the center of the front over the marquee were restored not long before the building sold. They’re not lit up at night by flourescent lights inside and look wonderful! A last glimmer of the old glamour that used to live there.

Correction to previous comment: The glass bricks are NOW lit up at night. Sorry for the typo.

As an addendum to what Danny Proctor said, the Seventh Day Adventist Community Services Center also operates a thrift store in this location.