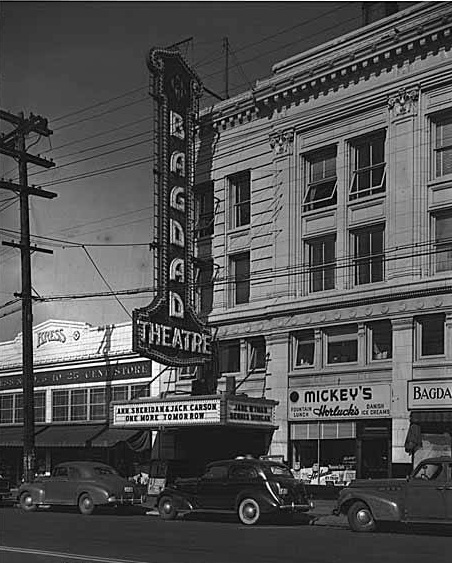 The building was built and originally owned by the Fraternal Order of Eagles, and the building is sometimes referred to by older citizens as the Eagles Building. The Bagdad Theatre was opened on May 28, 1927 and it was equipped with a Wurlitzer organ. In June 1947 it was renamed Ballard Theatre.

The building still stands, mostly used as office space. The last remaining performance space in the building (the Backstage Theatre rock club) closed its doors in the spring 1998. The space was later occupied by a fitness center and in 2013 was in use by the Great Harvest Bread Company.

Webster and Stevens were photographers, not architects. The architect of the building was William R. Grant.

Mike was correct. The Bagdad Theatre closed in 1947 and reopened on June 25 as the Ballard Theatre. Lou Rugani found two photos of the theater with the name Ballard on the marquee, and submitted a page for the theater under that name. The page will have to be removed, of course, and this page renamed Ballard Theatre. Maybe Ken Roe can move the photos to this page, or notify Lou that he should re-upload them here?

The only mention of an earlier Ballard Theatre in Seattle that I’ve been able to find in the trade publications is a short review of a movie serial, published in the June 14, 1924, issue of Exhibitors Trade Review, that was signed “Ballard Theatre – Seattle, Washington.”

In 1916, Ballard had a house called the Idle Hour Theatre, mentioned in the September 30 issue of The Moving Picture World. The house had been closed for some time and was to be reopened by a J. T. Nelson.

Another early movie house in Ballard was mentioned in the January 25, 1919, issue of The Film Daily, which said that the Empress Theatre in Ballard had been sold to Martin McClanahan by A. C. Alden.

The Empress was still operating under that name when Jensen & von Herberg began construction of the Bagdad, according to this page at HistoryLink. The partners had bought the Empress and another Ballard house, the Majestic, by November, 1926. The page also says that the Bagdad opened in May, 1927.

As for the Bagdad, if it was listed as open in 1926 there might have been an earlier house of that name somewhere in Seattle as well. The July 8, 1927, issue of Motion Picture News also indicates that the Bagdad had opened recently:

“CLAUDE JENSEN, Portland member of the Jensen-Von Herberg firm that now operates a string of suburban houses in Seattle and Portland, left here last week after having spent several days in this city conferring with John G. Von Herberg and Leroy V. Johnson, the president and managing director of the circuit, respectively. During his stay, Mr. Jensen attended the opening of his new Bagdad Theatre in the Ballard district.”

I think we can assume that the first Ballard Theatre was in the Ballard district, and if it was operating by 1924 and still open as late as 1929 we can also assume that there were at least three theaters in Ballard before the Bagdad opened, and perhaps at least four, if Idle Hour was not an early aka for the Majestic, the Empress, or the first Ballard. The Majestic was operating at least as early as 1917, when it was mentioned in the February 3 issue of The Moving Picture World.

Julie D. Pheasant-Albright’s book Early Ballard mentions seven theaters in Ballard: the Bagdad, of course, and the Majestic (on what is now the site of the Majestic Bay Theatre) plus five vanished houses; the Crystal, in the Junction Building; the Bat, on the corner of 63rd Street and 14th Avenue NW; the Empress, at the corner of Market and Tallman Avenue; the Woodland, on 65th Street and 6th Avenue NW; and the Ballard, near the corner of Ballard Avenue and Ione Street. Years of operation are not given.

This page at HistoryLink says the Crystal, Ballard, and Tivoli Theatres were all operating in Ballard by 1910, but only the Ballard Theatre operated through World War I.

“The Bagdad Theatre at 2218 Market Street opened May 28, 1927 and remained in business until 1949. The building was designed by local architect Frederick J. Peters and is known as the Eagles Building. The theatre showed movies, had 1000 seats, and a Persian decor.”