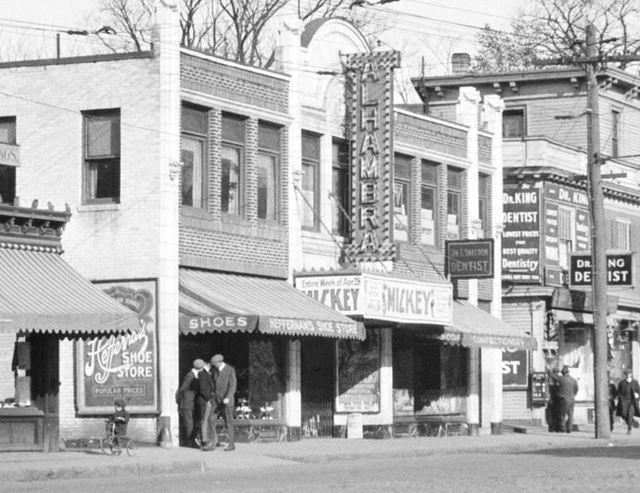 This theatre was located in Quincy Square near city hall. It was across the street from the Church of the Presidents. Opened as the Alhambra Theatre in 1916, it was renamed the Art Theatre during the 1940’s. It has been demolished.

The Alhambra Theatre was called the Art for some of its life. Heres a post from our friend Tom N:

“The Art was an Art Deco style building on the site of what is now an office building at the northwest corner of Hancock and Granite next to the cemetery which is also next to the old city hall. The current Flagship Cinema site used to be a Sears and Roebuck. When I was a kid, I remember seeing a faded sign for a theater on the wall of building near Sears. It gave the prices of the evening and matinee performances and it may have made reference to vaudville. I think my father said that they’d built Sears in what had been a theater building”.

The Sears building theater was the former Quincy Theater, don’t know when it was built but it closed in 1952 and the building was demolished in 1959. Tom, thanks for the info on these theaters.

The Art Theatre in Quincy Square was on the west side of Hancock Street, a little way south of the old cemetary. It was opened as the Alhambra Theatre around 1918. Next to the lobby entrance on the right was the Alhambra coffee shop, and after the theatre changed its name to Art circa 1945 the coffee shop kept its original name and did not change. The Alhambra presented touring burlesque shows, such as those troupes which played in Boston at the Gayety, Old Howard and Casino theatres. It had no balcony and probably about 900 seats. Along the sidewalls were a row of orchestra boxes, but these box seats had been removed when I started going there in the 1940s. I saw movies such as “Bambi” there, also “State Fair”, maybe “The Yearling” and “My Friend Flicka” – my mother took me to a lot of these flicks aimed at kids. It had a tall white-brick stagehouse w hich backed up to the railroad tracks. (The tracks were at-grade in those days, not down in a cut like today.) The name was change to Art Theatre around 1945 or so. I went there countless times as a teenager. A friend in highschool was an usher and doorman there circa 1953-54. I’m not sure when it closed, maybe circ 1960 or so.
It was razed circa 1970- part of the site in front is now an open plaza and to the rear is that big office building set back from the street at the north intersection of Hancock and Granite streets.

The office building is a Stop and Shop regional headquarters.

Newspaper correspondent Richard T. LeBreque, writing in the Quincy Patriot Ledger of April 20, 1962, states that the Alhambra Theatre opened in 1917, was built for $50,000 and had 800 seats. It was built by Henry Kincaide who had earlier built the Kincaide/Quincy/Capitol Theatre further south on Hancock St. Kincaide was also in the retail furniture business and was a one-time political figure. After a year presenting touring burlesque shows on stage, Kincaide leased the Alhambra to one Fred B. Murphy, who had a background in film distribution. Murphy reopened the theatre as a movie house. He later worked at both the Quincy Theatre and the Strand in downtown Quincy.

In the Patriot Ledger Archives column in the Quincy Patriot Ledger of Oct. 13, 2008, there is a news item dated Oct. 17, 1958 “Cigaret Butt Lands in Ventilator; Cuts Film Program Short”. Someone tossed a butt into a ventilator inside the Art Theatre in Quincy around 10PM the previous evening. This started a small fire and ended the movie which was Rock Hudson and Cyd Charisse in “Twilight of the Gods”. I’m nearly certain that smoking was not allowed in Quincy movie theaters in the 1950s.

Still another old Alhambra ad was reproduced in the Patriot Ledger Archives column, this one from March 7, 1936. The theater was running shows continuously to 1030PM, and opening Saturdays at 1030AM. Movies were “So Red the Rose” and “The Crime Patrol”. It says “Tonight – 50 1-lb Boxes of Howard Johnson’s Chocolates Free.” I assume that the boxes were given out to the first 50 ticket buyers.

In the Street View photo above, the Art’s entrance was located on the street to the left of the old 2-story gray building, and extended down in back to the right side of the office tower.

Given it’s 1917 opening and its original name of Alhambra Theatre, this house must be the project noted in the March 11, 1916, issue of The American Contractor:

I haven’t been able to discover much about E. W. Campbell, but the July, 1911, issue of a magazine called New Boston features an ad for the Atlantic Decorating Company at 5 Park Square, E. W. Campbell General Manager, which boasts that they are “Architects and Constructors of All the Noted Shows in Boston.” I don’t know if by “shows” they meant theaters or not. I did find one reference to Campbell having designed a display for an auto show in Detroit, so maybe the firm specialized in trade shows.