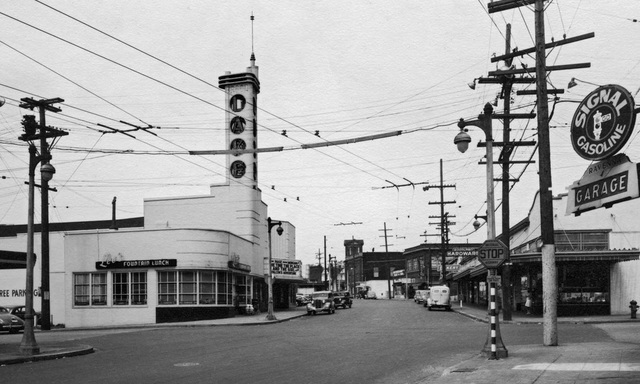 This was the second Green Lake Theater in Seattle. This one opened August 5, 1937 and closed in early-1958.

In 2005, the building is occupied by Pacific Color Inc.

The Green Lake was considered a very modern theater when it opened on August 5, 1937. An ad declared it “As Modern as Tomorrow.” It was acclaimed as one of the Northwest’s finest theaters with its Mirrophonic sound, air conditioning, and a capacity of 750 patrons — “every seat a loge chair.”

At some point the theater’s address was changed. The grand opening ad lists the address at 7111 Woodlawn Avenue.

The Green Lake Theater closed in 1950.

Unfortunately, Issuu’s scan of the magazine loses part of the text in the fold between pages, but Boxoffice of October 16, 1937, ran an illustrated article about the new Green Lake Theatre. There’s even a photo of the architect of the house, the prolific Bjarne Moe.

An article about this theater: View link

The theater’s once distinctive sign tower was recently uncovered during operations to remove it; this article has pictures and some theater history: View link

Grand opening ad for August 4th, 1937 has been posted here.

Here is an updated link to the 1937 Boxoffice article about The Green Lake Theatre.

An Art Deco masterpiece and the tower a beacon for the neighborhood. Too bad it is also history. The box-like replacement is a snoozer. A charming area. Needs another stylish theatre to replace the Green Lake.

Unfortunate that the tower sign could not be saved. Would have added personality and unique quality to an area of the city that is lacking in that department these days. Green Lake is one of the only unique qualities now.