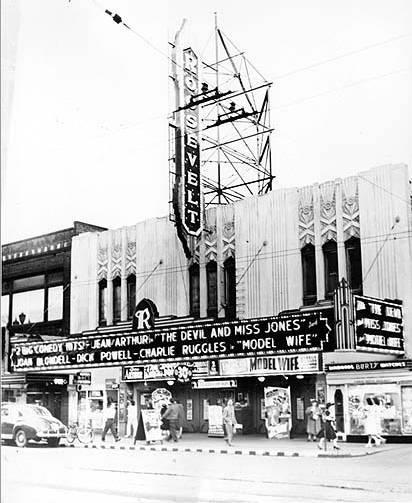 Local movie impresario John Danz opened the Pike Street Theater on Pike Street near 5th Avenue in 1933. It was later renamed the Roosevelt Theater and in 1964 after a remodel by architect Alfred H. Croonquist it became the Town Theater. It closed in 1984 and has since been demolished.

The Roosevelt had large black-and-white portraits of Franklin and Teddy Roosevelt flanking the stage. They were spotlighted between shows. There even were black curtains that origiinally were pulled over the photos while the movie was playing. That practice eventually ceased, so FDR and TR stared across at each other while the audience stared at the screen.

This really should be listed as the Town, with Roosevelt as an aka, as that is what is was called when it closed.

Boxoffice of November 16, 1964, reported that the Roosevelt Theatre at Seattle would be replaced by a new, first-run house called the Town, to be operated by Sterling Theatres. The bland and boxy facade that replaced that splendid zig-zag Art Deco front was the work of architect Alfred H. Croonquist. The impression given by the article was that the theatre would be virtually rebuilt, indicating that an art deco interior was probably lost at the same time.

A larger version of the 1941 photo linked above, along with additional information about the theater, can be seen at this web post by Seattle chronicler Paul Dorpat. Especially interesting is the information in a comment by David Jeffers, revealing that the original architect of the Roosevelt was Henry Bittman. Bittman, an engineer who became a licensed architect in 1923, was known for his use of terra-cotta ornament, and many buildings of his design featuring that material still grace the streets of Seattle’s older neighborhoods.

Grand opening ad as Roosevelt on September 2nd, 1933 as well as the opening ad from December 24th, 1964 has been posted here.

The original Art Deco exterior was dramatic. The modern remodel a sham and sad cover up of a unique building. Lack of imagination prevailed until the demolition years later.

“The Graduate” opened here fifty years ago today. The film went on to play (a venue record?) 52 weeks. And to commemorate the classic film’s golden anniversary, here’s a new retrospective article which includes some exhibition history (and other) details.