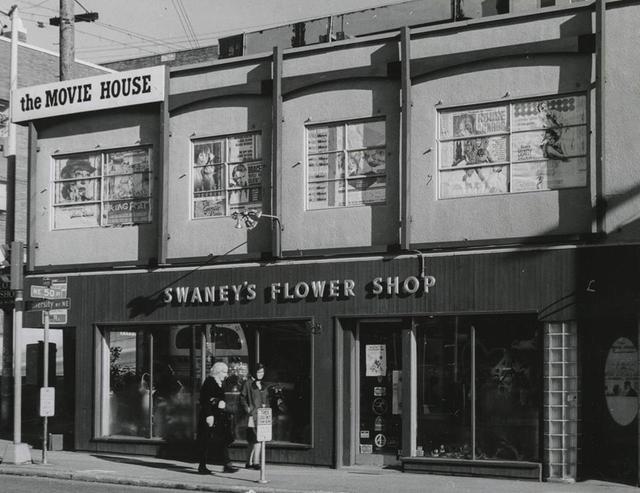 Tucked up behind a bookstore in the University District, the Grand Illusion shows a variety of films – foreign, classic, independent, etc. It opened in 1970. It seats about 70 patrons. It was a tiny screening room in the 1930s.

Other cinemas I thought of that were named after movies are SmultronstÃ¤llet (Wild Strawberries) in Stockholm, named after the Ingmar Bergman movie, and Cinema Paradiso in Fort Lauderdale, named after the Italian movie or else the theatre portrayed in it.

And, in fact, there was indeed a “Ben-Hur Drive-In” in Indiana…also a “New Merry Widow Theatre” in St. Louis, possibly named after the operetta rather than the Ernst Lubitsch/Jeanette MacDonald film.

I’m sure the late Mr. Powell and Ms. Loy would appreciate their films running alongside of a classic like Pootie Tang.

For many years the auditorium space was occupied by a dentist’s office. The Grand Illusion was originally The Movie House, the first cinema in what became Randy Finley’s Seven Gables circuit, now part of Landmark Theaters. The current name came from Paul Doyle, who ran the cinema for 20 years before selling to a non-profit. He now owns the Columbia City Cinema in Seattle’s Rainier Valley.

According to this article, the theater is not doing well financially: View link

Well it is a Grand Illusion.

A bit of history as to how everything got started.

Wonder if they’ll play Inadmissible Evidence when they hit 50 years?

Wow, nice article from the front page of the November 26th, 2017 Seattle Times about several of Seattle’s historic movie houses starting with the Grand Illusion, including why we go to the movies!: