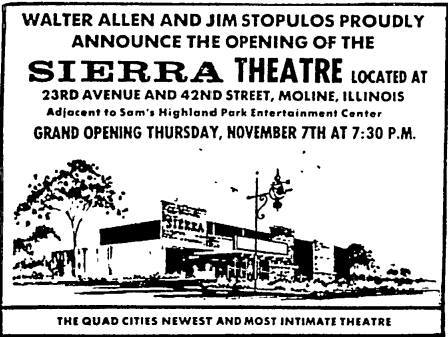 The Sierra Theatre opened in November 7, 1968 with Peter Ustinov in “Hot Millions”. It was closed around 1990. This single screen theatre was located on 24th Avenue between 41st Street and 42nd Street. It was later renamed Sierra Cinema and was closed by Showcase Cinemas on February 20, 1992 with Warren Beatty in “Bugsy” A medical center was located in the building, but has since moved out and it is now a fitness center/gymnasium.

The building was still there as of December, 2007. It does currently house Moline Rehabilitation Services.

Owned by Pat Stopulos of Davenport, who owned the Coronet on Harrison Street, and the twin theaters on Spruce Hills, it opened as first run house, and exhibited big productions like Funny Girl.

The June 17, 1968, issue of Boxoffice Magazine published a small rendering of the Sierra Theatre, then under construction. The caption said the house would have 700 seats (the November 11 issue gives the seating capacity as 630), and be designed for easy conversion into a twin, and though it would open showing 35mm films it would also be pre-wired for conversion to 70mm movies with multi-track sound. I guess they were hedging their bets.

The November 4, 1968, issue of Boxoffice said that the opening of the Sierra was scheduled for November 6, with the Peter Ustinov film “Hot Millions” as the first feature.

Medical business that was located there is now gone. Building is up for sale.

I managed this theatre on 3 different occasions during the late 1980’s and early 1990’s. Loved the projection booth with it’s clear glass front so the audience could look right into it.

The theater’s name was changed to the Sierra Cinema. It was operated by National Amusements / Showcase Cinemas which closed it on February 20, 1992 with Warren Beatty in “Bugsy.” The theatre was auctioned off on January 9, 1993.

I have a lot of fond memories of this theater from my childhood. I grew up for a time across 23rd in the Highland Manor apartments, from 4th grade until high school. I haunted the bank of video games they used to have at Sam’s Bowling Alley and this theater like a little ghost back in the early 80’s. I searched for the name of this theater for years, and even joined this site only to find this tidbit of info, but to no avail, even on this site’s very own search engine – I must have been doing something wrong on all my searches as some of these comments here in this section were left before my searches. Oh well, I’ve finally found it! During another desperate 2am sweep and search!

I was born in 1971 and lived near this theater from about ‘79 to '84, so as a young boy I was privileged to see a lot of the great genre flicks that were being released during that seminal time on this theater’s screen. All of the viewings down here were viewed all by my lonesome. Though I was mainly accompanied with friends or family to places such as the Showcase Cinemas or the Parkway Theater, the Sierra Cinemas was the one place that I went to all by myself as a kid, for whatever reason – I don’t think too many kids were as crazy about movies as I was back then. This is the place that solidified my love of cinema. It was my temple.

“For Your Eyes Only” was probably the one movie I saw the most here. Though it’s not considered the best Bond movie, and I can see why, it will always hold a place in my eyes as one of the top Bond flicks. The nostalgia I have for this movie brings it forward quite a few notches in my book. Back in the day I would save up my pennies and dimes and quarters and whatever little money I could cajole out of my mom, and any time I had enough for the price of admission, I’d run across the street to see this movie again and again. I loved the Bill Conti score. And though I was just a kid I loved the exotic locales and the exciting action sequences, especially the snow sequences. I also saw “Battle Beyond the Stars” here, and “The Dark Crystal,” a Pink Panther movie or two – you name it, if it played here, I probably saw it, whether it was rated R or not, as the employees here were pretty cool in granting me admission to movies that weren’t too crazy for a kid. I do remember being denied once, but can’t recall the movie, and in hindsight, maybe it was for the best.

Speaking of the staff – I do remember them as being really cool and friendly. I’ve recently moved back to the QC and was sad to see it is now a gym. I took a photo regardless.