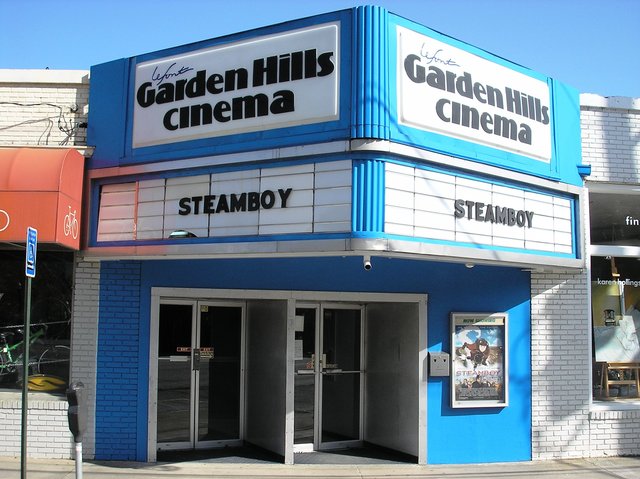 Atlanta’s premiere venue for independent and foreign film since 1939 and lovingly managed by George Lefont. In 1950 the Garden Hills Theatre was operated by Affiliated Theaters, a subsidiary of McLendon Theatres. This theatre was part of the Weis Theatres chain from 1958 and called the Fine Art Cinema from November 27, 1958. If my finite memory serves me right, I believe that at one time it was equipped with a sequin curtain. It was closed in 1977.

Rocky Horror played here at one point. The last film I saw there was about Betty Page..and that was a few years ago. I hate that we can’t keep one arthouse cinema (besides the Fox) open in this city. But then again, the Atlanta city bird is the crane…..

As I mentioned in a post for the Roxy/Capri, the Fine Art was owned by John & Ruth Carter prior to Weis Cinemas. I worked at primarily at the Capri circa 1967. Ruth Carter died in 2009:

CARTER, Ruth Goss Ruth Goss Carter, one of Atlanta’s last Grande Dames, died on September 22, 2009. She was 94 years old. Mrs. Carter was born in 1915 in Charlotte, North Carolina, attended Hollins College in Virginia, and married John Hennen Carter of Atlanta, in 1936. She and her husband were co-owners of the Brookhaven, the Buckhead “Capri” and the Garden Hills “Fine Art” theaters. Mrs. Carter was a devoted bridge player and a life Master of the American Contract Bridge League. She was an avid history buff and worked as a docent at the Swan House adjacent to the Atlanta History Center in Atlanta. She will be missed by her friends and surviving family: her son, John Hennen Carter Jr. of Stockbridge, Georgia; her grandchildren, John Carter III and Kimberly Marx of Atlanta, Georgia, Erik Perschmann of Carver, Minnesota, James Gardner of Stockbridge, Georgia, and Amy Castillo of Jackson, Georgia; and her great-granddaughter, Therese (Princess) Carter. The memorial service will be held at Peachtree Road Methodist Church on October 17, 2009 at 2 o'clock pm.

Published in The Atlanta Journal-Constitution on October 11, 2009

In 1964 – ‘65, I saw “The Pumpkin Eater” and “A Stranger Knocks”, while it was known as the Fine Art. The parking was somewhat isolated, behind the theatre. The admission was $1.50, like other Atlanta first runs at the time. The back 1/3 of the theatre had a different aisle/seat arrangement than the front 2/3. The screen was adequate, but the layout would have allowed it to be larger. This theatre had the highest seat-to-screen upward viewing angle than any other I have seen.

I saw ‘Das Boot’ at the Garden Hills shortly after moving to Atlanta in the early 80s. For a time in the mid-90s I only had about a 5 minute walk to the theater, so I was something of a regular. Too bad it’s joined the list of defunct Atlanta revival/art theaters.

The name should be Garden Hills not Fine Arts . 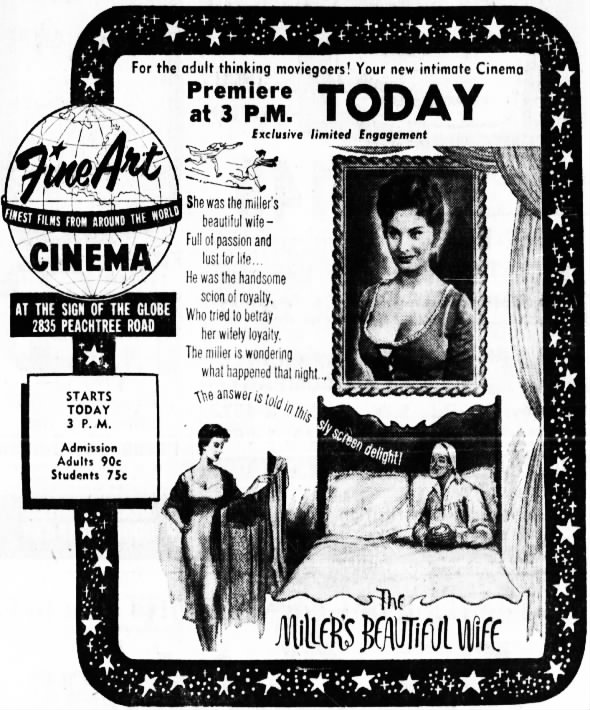 I worked here in 1981 as a 15 year old. I ran the concession stand seven days a week, and was paid in cash every Friday out of the cash drawer. We didn’t have a register at the concession stand so I had to do all the math in my head, which I’m sure helped me in my schooling. My mom worked for a video distribution company that had an office in the basement of a mansion owned by André Pieterse, a former VP at MGM, who was part owner of the Garden Hills Cinema. Mr. Pieterse had bought the mansion from Isaac Hayes. Mr. Pieterse offered me the concession job, and it was too much money for a 15-year old to refuse. This would be my first theatre job, but not my last. This is where I got the bug. I remember there was a French guy named Greg, who ran the box office and was part-owner. The projectionist was ‘Smitty’ (don’t remember his name).

I had a great time at our one-screen theatre and small staff. I remember seeing Das Boot here, which was shown in German with English subtitles (much better than being dubbed). One time Mr. Pieterse thought I was stealing from the concession stand because he thought the per-capita sales average should be higher. He sent me to work for a while at the Columbia Theatre downtown, which he also owned, and had his college-age daughter (and her boyfriend) come in and run the concession stand at the Garden Hills Cinema. After a few weeks, he brought me back and apologized. They had made even less per capita than me. I remember talking to him at first up by the box office (Greg was nearby listening) about it, and I had said “you pay me too much to steal.” Later Greg told me that he had to really hold in his laughter because he knew I wasn’t being paid much. Even though it seemed like a lot to me. I think I was getting about $150 a week for 7 days of work.

In the 9th grade, I wrote my first ever short story for an English class. I named it ‘Smitty’s Shadow’. It was a fictional account of the projectionist Smitty closing up the cinema and seeing a shadow. He goes all around looking for the intruder, when it ends up being his own shadow. Working there was a great experience as my first real full-time job, and opening my world up to the operations of a movie theatre.