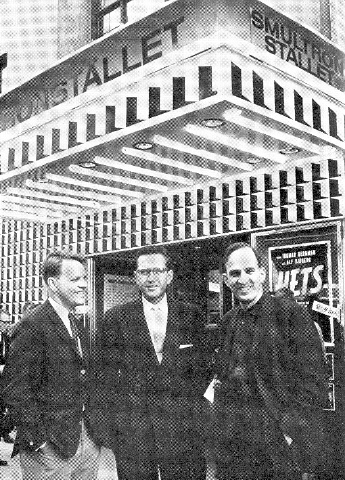 Originally opened in 1916 as the Ugglan Teater, a cabaret theatre. In 1921 it was converted into a cinema. On 6th August 1934 it was re-named Lejonungen Bio. Renovated in 1963 it was operating as an art house cinema named after the Ingmar Bergman film of the same name. (“Smultronstallet” means “Wild Strawberies”.)

This photo shows Ingmar Bergman (right) with other officials at the opening of the SmultronstÃ¤llet Cinema. I’m guessing it was in the late 60s or early 70s. The film “Hets” on the poster was a 1944 film that was directed by Alf SjÃ¶berg and written by Bergman. It played the U.S. as “Torment.”

Originally opened as the Ugglan in 1916 it was a live theatre and cabaret space. In 1921 it became a cinema and from 6th August 1934 it had been modernised and re-named Lejonungen.

It became a repertory cinema in 1963 and was re-named Smultronstallet but this was short lived and it closed on 31st July 1966.

I’ve noted in some old copies of International Film Guide that there were at least three other SmultronstÃ¤llet cinemas, run by Svensk Filmindustri in GÃ¶teborg, Vasteras, and Malmo.