Gateway by the Bay (Official) 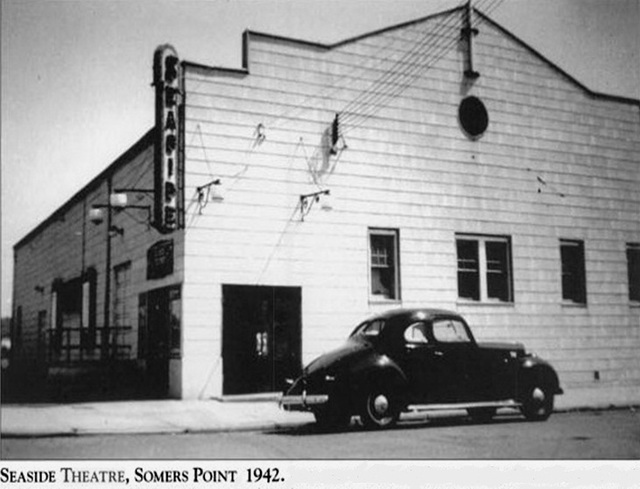 A small 380-seat early 20th Century theatre that showed movies until the mid-1970’s, when it became a venue for live theatre.

In the spring of 2005 the nonprofit organization that owns the Gateway Theatre decided to put the theatre up for sale. The City of Somers Point has made an offer for the building, hoping to keep condos or retail space from replacing the theatre on its desirable bayfront site. In 2016, purchased by nonprofit Theatre Collaborative of South Jersey for plays, concerts and musicals and other events. In August 2017 reopening, after having being “gutted' down to the cinder block and sand and has been rebuilt from the ground up”.

The Point 4 was built and operated by Frank Theaters and was a converted bowling alley. The theater was very cheap and austere looking. I always got the impression that they put as little money as absolutely possible into the conversion into a theater. It wasn’t the worst place to see a movie, but it was pretty lame even compared to most contemporary multiplexes. I recall that Frank Theaters had some problems with local business licensing ordinances and fees because they were operating an ice cream parlor on the premises of the theater. The Gateway would be missed, the Point 4 won’t.

The Point 4 was originally a bowling alley that I patronized as a kid. Around 1983 the Frank family purchased it and converted it to 5 auditoriums, although only 4 were used. The 5th was left as a garage. The Franks already had plenty of screens in the area and with the Gateway theatre no longer showing movies, there was no other theatre in Somers Point. However, the Franks had been trying to obtain the boardwalk theatres in Ocean City for years, and this gave them a chance to compete for films in the same area, in some cases, preventing Ocean City from running good pictures. The Point 4 did take business from Ocean City. As a manager of the Point 4 I remember customers calling from O.C. to get directions to the Somers Point theatre.

The theatre used older Century heads and platter systems — one platter system for each pair of screens. Remote controls were in the lobby and I had installed indicator lights in the boxoffice to let the cashier know when the movies started. The auditoriums were rather simple, with no movable masking and no proscenium curtains.

I was often disappointed however that the equipment was often in need of repair, there were no spare parts, the sound leaked from each auditorium, and the lenses were in poor shape.

But in the end the theatre accomplished its mission. The Ocean City boardwalk theatres, long owned by the Shriver family, were sold to the Frank company (just like the Wildwood theatres) in 1989.

Whent they twinned the Ventnor in the late 70’s they did a cheap job. They had no curtains or masking. It was a shame becuase the Ventor has a nice stage and screen with curtains. If I rememebr correctly they used the curtains in place of masking.

Somers Point’s pink theater saved from developers
July 21, 2005 â€¢â€¢ 585 words â€¢â€¢ ID: chr23680460
Courier-Post Staff SOMERS POINT Bill Marshall rescued the Gateway Playhouse eight years ago. Now the city has come to Gateway’s rescue, agreeing to buy the theater for $1.1 million rather than let it fall into the hands of developers bent on building more condominiums. The pink theater along Bay Avenue shut its doors after the 1998 death of Paul Aiken, who founded the South Jersey Regional Theatre at the Gateway. Marshall, a local pro golfer by trade, leased the theater ….

Listed as part of Shriver Theatres Co. in the 1976 International Motion Picture Almanac.

I saw a Cole Porter show at the Gateway about ten years ago. Does anyone have a preservation update since March 2006?

I was in Somers Point last month but I forgot to swing by here. Mr. Memory would be disappointed.

Status should be Closed/Renovating, as the theater is not operating and a nonprofit is working on restoring it. They have raised a good portion of the money they need and have received a post-Hurricane Sandy disaster grant that will go toward HVAC and electrical repair. Philly.com story here.