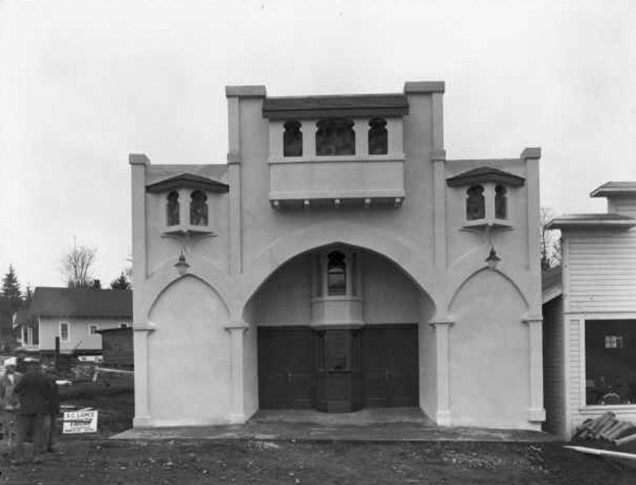 Opened on April 12, 1925 as the Empress Theatre. It was designed by architect Gaston Lance. In June 1930 it was renamed Peninsula Theatre. In 1933 it was renamed Blue Eagle Theatre and from February 1936 it became the Roxy Theatre, which closed in 1955. It has been demolished.

Film Daily Yearbooks 1941-1950 show the only theatre listed in Gig Harbor as the Roxy Theatre, Highway Avenue with 400 seats. I presume this is the same theatre with a re-named street address?

NAME AT TOP SHOULD BE ROXY THEATRE

The first order of business was in February 1925 when the manager, Mr. OM Jacobson of The Movie Show inaugurated a contest to name the new theatre. The winner would win $10 and the second and third winners would each receive a 30-day pass.

Previously plays, movies and vaudeville acts were performed at the Community Hall. A couple of those early acts according to news accounts were “The Chorus Lady” starring Pat O’Brien and Margaret Livingston; “The Beloved Brute” starring Marguerite de la Motte, Victor McLaglin and others.

The winning name was Empress Theatre and it opened the doors to a packed house on April 12, 1925. Bebe Daniels starred in the vaudeville act “Miss Bluebeard” with the Alvord Kiddies as the feature act performing dancing, singing, acrobatics and telling jokes. For the movie, it was the usual Mack Sennett comedy, followed by Pathe Review with Mrs. Higgins of Gig Harbor, Miss Hazel Hoydon of Tacoma and Mr. J. S. Bogan singing. Admission was 35 cents for adults and 15 cents for children.

On November 8, 1929, O. M. Jacobson who owned and managed the theatre for the past five years sold his interests to R. P. Burfield, an experienced showman. The theatre was closed while it installed the updated Holmes Sound Equipment and underwent interior decoration improvements at a cost of $10,000. The grand opening was scheduled for November 15, 1929, showing talkies for the first time in Gig Harbor. It was leased to D. C. Milward and Marvin Dymess of Seattle. G. Donald Gray, baritone with KOMO and Sidney Dixon of KJR, both appeared at the grand opening. The new management ran shows on Saturday and Sunday with matinees on both days; prices remained at 35 cents for adults and 15 cent for children with the matinee price at 25 cent for adults and 10 cents children.

In May the front of the theatre building was treated to new decoration which, according to The Peninsula Gateway, vastly improved the building. On May 30, 1930, Mr. Burfield, manager of the Empress Theatre decided to change the name of the playhouse and has given the high school students the opportunity to choose the new name. Mr. Burfield and Mr. Richardson, building owner, would pick the best suited name on June 1, 1930. The name they chose was Peninsula Theatre. For some strange reason the name suddenly appeared as Peninsulan Theatre with no explanation on November 7, 1930. But by December 19, 1930 they were back to using Peninsula Theatre again. By the end of 1930 the theatre started experiencing strong competition from the New Community theatre in Port Orchard.

With the effects brought on by the Depression and other international events including the conflict in Europe, the theatre suffered. It was renamed The Blue Eagle Theatre and was named for Franklin Delano Roosevelt’s National Recovery Act. They planned on opening for programs Friday and Sunday with the first show August 4, 1933 being “King Kong.“ Due to the economic condition, it did not succeed and was closed for at least a year.

On February 14, 1936 the theatre was sold to M. H. Thompson and F. M. Higgins. However, by June 1936 Mr. Higgins gifted his share to the Thompson family and was no longer involved. The Thompsons renamed the theatre The Roxy. Rex Thompson, son of M. H. Thompson, reopened the Roxy with A. E. Merry as manager. Movies again had become big time entertainment and the Roxy ran three movies every night. Westerns were very popular in Gig Harbor at the time.

The Merrys continued to run the theatre until 1955 when Mr. Merry locked the door for the very last time and the building stood empty for a long time.

As time passed, the final occupants were a large colony of working bees that produced a bonus of honey when the building was torn down.