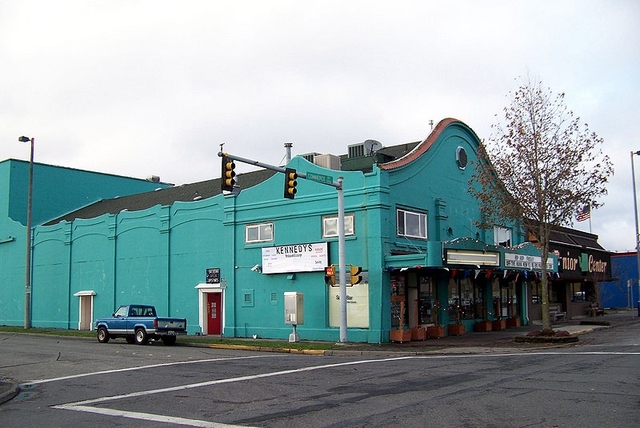 The 600 seat Chinese-style Peekin Theatre opened in 1925. Its pagoda-style facade survives today. It was built by a local contactor, Val Quoidbach, for a customer who fled without paying, leaving Quoidbach with the theatre. Quoidbach, his wife and their two small sons moved into the apartment over the lobby and went into the movie business.

The Quoidbachs ran the theatre for 10 years. The name changed from the Peekin Theatre to the Roxy Theatre sometime in the 1930’s, and the theatre was sold to W.G. Ripley. The Roxy Theatre underwent extensive remodeling under Ripley, adding a three-sided marquee and a vertical sign.

During World War II, the Roxy Theatre was the top moviehouse in Longview, showing major-studio, first-run productions. It was sold to the Sterling Theaters chain of Seattle in 1945, and the first-run policy moved to the larger and newer Longview Theatre. The Roxy Theatre switched to weekend operations and showed B pictures, and finally announced ‘Closed for the Summer’ in June 1946. The ‘Closed for the Summer’ sign remained in the box-office window for years.

The Roxy Theatre was later used as a church and a live theatre. It was sold in 1983 to Darrell and Doreen DeWitt, who opened a furniture store in the auditorium and enclosed the old theatre entrance and adjacent retail spaces to add display space. The DeWitts preserved the stage arch, although it is filled in with sheetrock and painted. The arch is all that remains of the old theatre.

The furniture store went out of business in 2001 and it became a nightclub, which closed in 2010. The building was purchased by a church, and restoration work began in September 2015 to convert the theatre back into use for live performances, movies and banquet suite. The seating capacity will be reduced to 400.

The Film Daily Yearbook, 1941 edition has the Roxy Theatre listed as having a capacity of 350. It is not listed in the 1943 edition of F.D.Y. (only the Columbia Theatre & Longview Theatre are in that edition).

In the 1950 edition of F.D.Y. the Roxy is again listed (together with the other two theatres in Longview) with a seating capacity given for the Roxy as 600.

I think this is the theater. Street sign says Commerce Street. The photo was taken in January 2009.
http://tinyurl.com/m82b47

As of September of 2015 this theater has started to be restored! It will soon become host to movie events, live performances and will be able to be rented for events such as weddings. It will also host church services on Sundays and have a cafe in the front.

It is very exciting to see the work they have started on this historic structure.

This is indeed very good news! I’d like to see some more pictures of this theater.

Right now the building is being gutted, but once more progress starts showing I will post some pictures.

This item appeared in the September 12, 1925, issue of The Moving Picture World:

“Work has begun on a new 650-seat theatre in Longview, Wash. G. W. Swope, formerly of Marysville, Cal., an experienced theatre operator, will own the house, the estimated cost of which has been named as $24,000. The house will be dressed in Chinese colorings and designs and will be called the Peek-In. It will be a popular priced family theatre, and will have five dressing rooms under the stage, equipping it to handle roadshows and vaudeville. The house will occupy a site 100 by 50 feet. It will be ready in ninety days.”

I would imagine that the “…customer who fled without paying….” referred to in Katie Mac’s description of this theater was Mr. Swope. There might be a bit more to the story, though, considering this item from MPW of May 1, 1926:

“G. M. QUOIDBACK and associates have purchased the recently opened Peekin Theatre, Longview, Wash., from G. W. Swope. As the name would indicate, the Peekin is Oriental in its interpretation. It occupies a site 50x120 feet and is housed in a two-story building of masonry construction. It contains seats for nearly 600. Mr. and Mrs. Quoidback will operate the house.”Puget Sound Theatre Organ Society has this page about the Roxy, which includes a photo of Commerce Street in the 1920s showing the original Chinese style decoration above the theater entrance. It also cites David L. Junchen’s opus list of organs as saying that a 2/4 Robert Morton theatre organ was installed in the Longview “Peking Theatre” in 1921. I suspect that either Junchen or his source made the mistakes, giving the wrong year and theater name. MPW would not have published those notices four years late.