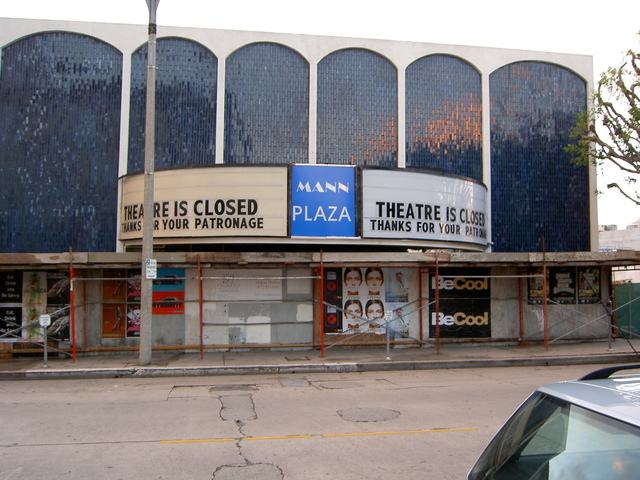 The Plaza Theater was a 650-seat single screen theater located in Westwood Village. It was a Laemmle theater and opened June 30, 1967. In 1981 Mann took over the lease. It once showed first run films but ended showing move-overs from Mann’s larger WestWood theaters (i.e. Village, Bruin, National).

This theater was once a beloved movie house of residents and nearby UCLA students who flocked to its midnight screenings of classic films like “Raiders of the Lost Ark” and more which were held on Friday and Saturday nights at the low price of $5.

The midnight shows stopped in 1999 and the theater closed in October 2004. It was demolished in 2005 to make way for a development project.

It’s a sad end for a nice neighborhood house.

Contributed by B, Erickson, Cinema Treasures
Get Movie Tickets & Showtimes

It took forever because of the zoning in the area and the neighbors on the east side of the property.

Westwood Village in the 70’s was, indeed, Southern California’s premier entertainment spot, much like the 3rd Street Promenade in Santa Monica is today. The fantastic Plaza Theater was a part of this excitement as Westwood was THE spot for first run movies. Yet, in its being located on quiet Glendon Ave. and in its focus on art films, the Plaza had a cozy, private feeling to it. I was always thrilled to catch a movie there! What is worse than the Plaza being demolished is the way that entire block of Glendon Ave. has been disfigured, and a charming piece of Los Angeles has taken on the look of a boring Orange County shopping complex. But that’s the way things go. Thanks for all for the great posts in tribute to this great movie theater.

Great photo of the theater found on this blog.

Thanks for the compliment, Ross! I publish that blog and someone recommended that I post the photo here, so I have. I am glad to help save part of the history of the Mann Plaza.

Status should read Demolished though.

For anyone who is interested, there is a new youtube video which shows both video footage and still of the Plaza dating from back in the 1970’s (note: the video footage is located in the middle of the video):

WAS JUST ANOTHER ONE OF THE FIVE MANN THEATERS OPERATED IN THE VILLAGE DID WELL ALL FIVE WITHIN SHORT WALK OF EACH OTHER, I WAS C..O.O. DURING THIS TIME 1980, NATIONAL, REGENT, FOX VILLAGE, BRUIN, AND MANN WESTWOOD 3 Later 4

The Regent and the Plaza were both Laemmle Theaters. The Bruin, Village, and Mann’s Westwood were Mann Theaters. Then there were two UA Theaters, the UA Westwood (later the Festival) and the UA Cinema Center on Westwood Blvd. (now a CV Pharmacy). Not sure whether the Avco Cinema Center and Crest were associated with any larger corporate chains.