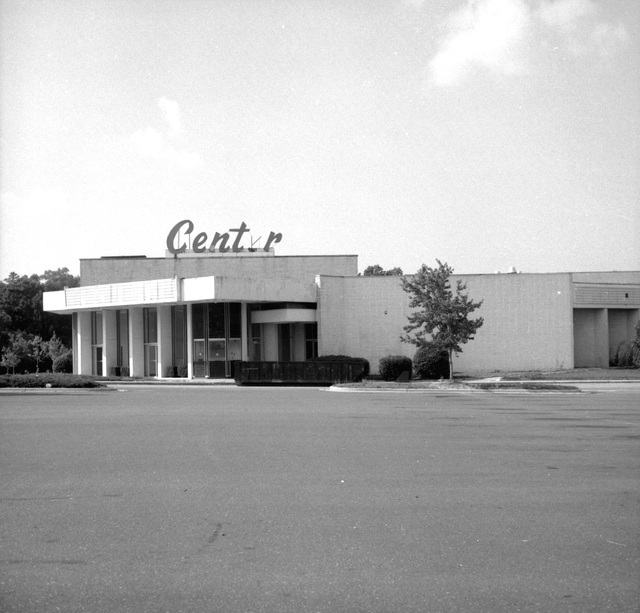 Located in the Lakewood Shopping Center, it opened on November 24, 1966 as the Lakewood Center Theatre. It was the Triangle’s first Ultravision theatre and the first modern design theatre that had rocking chair seating (with reserved sections), six-channel stereophonic sound and a 180-degree Ultravision widescreen that was capable of showing bigger presentations. The auditorium was huge and spacious with a seating capacity of 800. It was one of several designed by architectural firm Six Associates. By October 24, 1971, a second auditorium was built adjacent to the original, that was also a 180-degree Ultravision screen, and a seating capacity of 600. It was re-named Center 1 & 2 under ABC Southeastern Theatres. By 1983, the original auditorium was split down the middle into two sections creating two shoe-box auditoriums that had smaller screens and 400 seats in each when it was under Plitt Southern Theatres.

By 1986, the second auditorium was split down the middle into two sections as well, that made the auditoriums seem quite long and narrow with 300 seats in each, making this a four screen quad cinema complex, now run by Cineplex Odeon. Carmike Cinemas took over this theatre in 1991, when it still proved quite a draw for showing major blockbuster films when a screening of “Boyz In The Hood” drew record crowds.

The Center Theatre 4 remained the place of movie-going crowds. All of that changed by the mid-1990’s when newer and bigger multiplxes that were being built, and the Center Theatre 4 fell out of favor., and began to screen second-run films in order to stay afloat. Also, the surrounding area around Lakewood was losing business which didn’t help to draw in movie-goers to stay open. Carmike closed this theatre in 2001, and was later converted into a surplus store run by Duke University.

Carmike basically had total control of all indoor moviehouses in the Durham area. This was Carmike’s decision to closed The Northgate Twin in 1985,not to mention the closing of the The Yorktowne Theatre on Chapel Hill Blvd. in 1996,and the Ram Triple in Chapel Hill in 2000.

In 2001,the Wynnsong Cinemas in Durham REMAINS the only Carmike operated movie theatre between Durham and Chapel Hill. And to this day is still operational.

This theatre in its heyday played GONE WITH THE WIND numerous times during it’s re-release….I remember seeing it in 1980 to packed audiences in DOBLY STEREO

“CLOSE ENCOUNTERS OF THE THIRD KIND” was the BIG Christmas attraction on December 16,1977.

Waiting for the time capsule to open at the end of 2016.

Drewmike: I saw not only “Back to the Future 2” here but also “Indiana Jones and the Last Crusade” in 1989…but the Center’s showing of “Boyz In The Hood” and “New Jack City” brought in capacity crowds in 1991…. Nobody knows that a time capsule was placed there for 2016…. November 24,1966 was the year this theatre opened replacing the Downtown moviehouse that closed….

In it’s earlier days as a single screen movie house it was the reserved seat engagements of “Camelot” along with “The Sound of Music”, “My Fair Lady”, “2001” and the 70mm versions of “Gone With The Wind”, “Doctor Zhivago”,“Patton”,and “Ben Hur”(re-release)

BTW: did anyone opened that time capsule? I uploaded the grand opening ad.