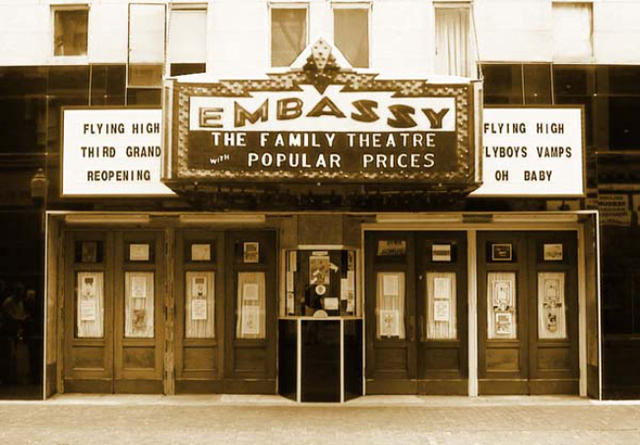 The original capacity of the Embassy Theater was about 500, seated in both orchestra and balcony areas. A full stage was in front of the screen, as some lesser-known country acts appeared from time to time, such as Tom Mix, Jr., in 1942.

The Embassy Theater was converted into a dress shop in the 1960’s; however, the owner simply built the shop in the former lobby and orchestra areas, preserving much of the theater. His son, Broadway actor Mark Baker, restored the theater back to its 1931 appearance, taking several years. The entrance, lobby, ceiling and walls of the orchestra, the screen (original-was barely saved from becoming a painter’s drop-cloth), and mezzanine lobby/restrooms have been restored to original appearance. A facsimile marquee has been installed.

Of all the classic theaters mentioned above in Cumberland, only the Embassy, home of countless B-Westerns, remains, spared from urban renewal and catastrophe by Mark’s father’s decision to convert it into a dress shop.

lostmemory—-thank you so much for adding all those great details to my first feeble attempt to write about the Embassy!