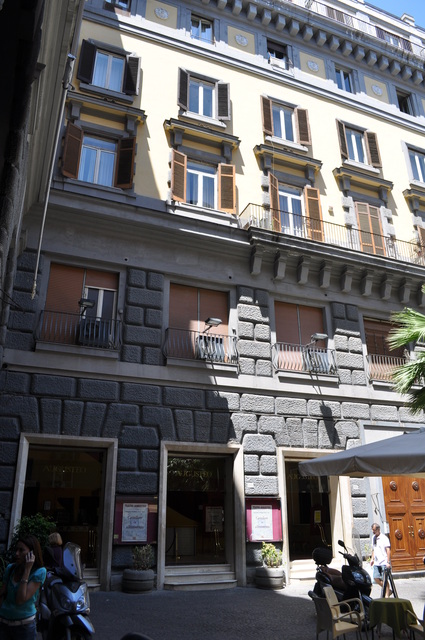 The Teatro Augusteo, formerly known as Cine-Teatro Augusteo and then Cinema Augusteo, was and is again one of Naples' most beautiful theatres. Located in the heart of Naples on a small square off the Via Toledo, it is near where the Funicular Centrale railway takes you up to the posh Vomero neighborhood on the hill above.

It was opened in November of 1929, imposing in structure, with a profusion of marble and decorative moldings. It was intended to be aristocratic in style and grandiose in its programming. In the last days of the silent era after the theatre opened, a full symphony orchestra accompanied films like “Wild Orchid” with Greta Garbo, “The Wonderful Lies of Nina Petrovna” with Brigitte Helm. Films of the major American studios opened here, from Paramount, MGM, Warner Brothers, preceded or followed by large choreographed ballets.

On January 10, 1930 the first sound film shown here was the hybrid “Noah’s Ark”. By January 23 over 250,000 people had seen the film at this theatre. In 1930 there began the music-hall programming often associated with the Augusteo. The tenor Beniamino Gigli sang here, sharing the program with ballets, modern dance, Argentine tangos, and acrobatics. Programming in following years alternated between movies and variety shows that were the Italian equivalent of vaudeville. On March 25, 1932 Josephine Baker performed in dances of the Casino de Paris and with American dancers. The place became the center of “chic Napoli”. Many great Italian artists performed here.

During the war the theatre was closed, to be reopened after the war under the management of the Allied Forces, who renamed it the Red Cross Club. In the 1950s the theatre began a slow decline. Parts of it, such as the balconies, were walled off, the walls of the auditorium were hidden behind wood panelling. The place continued existence as the Cinema Augusteo, but moved into a steady decline. From the 1980s on the programming became sporadic until the place was eventually closed and abandoned.

The theatre was finally restored, under the supervision of one Pippo Caccavale, bringing to light many of the original features, and reopened to the Neapolitan public in 1992 as a live theatre venue.

Here is a photo of the Cinema Augusteo which I took in the summer of 1989. I believe I was more interested in getting a shot of the flower shop bearing my name than in capturing the cinema. The theatre was probably closed for the summer as most movie theatres were and, to a great extent, still are. Italians prefer open air cinemas during the summer, and a number of Italian cinemas, in addition to an indoor auditorium, have an open-air space for the warmer months with separate seating and a separate screen.

Too bad you didn’t capture some of the charm of the theater. Dont need another Coke ad ;–)

BTW, I find some of these Europeon theaters fascinating. The Odeon is noteworthy for several reasons. According to CT, it is an historical cinema in Vicenza, Italy which opened as a movie theatre on the 18th of May 1907 and since then has never stopped its activity. The building was originally a church, one of the seven oldest in Vicenza dating back to at least the year 1000.

It was deconsecrated in 1809 and then converted into a craftsmen corporation meeting hall in 1858. Nowadays Cinema Odeon is probably the longest continously operating movie theatre in Italy and one of the oldest in Europe.

Sounds like it could have come right out of Dan Brown’s plot in the DaVinci Code.

The auditorium of the Teatro Augusteo, taken during the International Film Festival of Contemporary Art in September 2008:
View link
View link