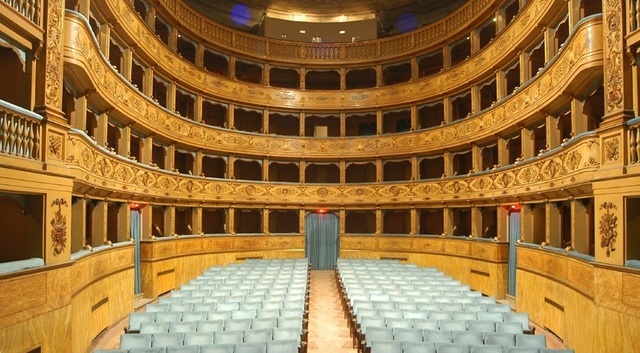 This venerable old treasure in the center of the beautiful Umbrian city of Perugia has an interior that looks like a smaller La Scala, with its many levels of boxes in a horseshoe pattern, and may have been used for operatic productions. A jewel box of a place, the theatre shows recent films and is host to local film festivals.

TWO PHOTOS HERE! Here is an exterior shot I took of the Pavone in 1971 when taking courses at the UniversitÃ  per Stranieri. To the left is the office of the local Italian Communist Party. To the right is an anti-communist graffito on the wall. It says “Prague teaches us, you red murderers!” It’s a reference, of course, to the Soviet crackdown on the liberal movement in Czechoslovakia. This second picture is a web shot of the interior. As you can see, it’s quite a beautiful theatre. I saw a movie here in August of 1971 called “Una cittÃ  chiamata bastarda” which is the western “A Town Called Hell,” with Telly Savalas, Robert Shaw, and Stella Stevens. Movies from abroad that are shown in Italy are universally dubbed into Italian. In the bigger cities there has been a movement in recent years to show some movies, especially American and French ones, in their original languages on certain days, sometimes with, sometimes without subtitles. This is not motivated by purism but by the opportunity to add to the boxoffice receipts because there is a large number of Anglophones and Francophones in Rome and other big cities who would go enjoy the oportunity to see films spoken in their own languages.