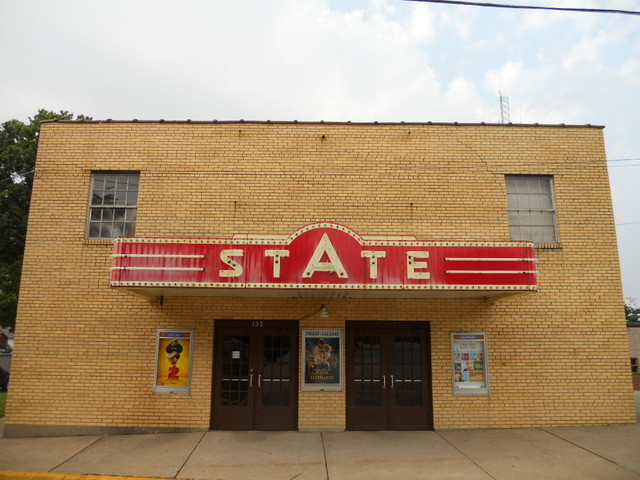 Not to be confused with an earlier State Theatre, this State Theater was built and opened on September 29, 1949. The small single-screen State Theater still shows movies. It is located on W. Elm Street near Kaskaskia Street and while it has a very plain façade, its somewhat Art Moderne-style marquee adds a bit of color to the otherwise bland theater building.

Came across a history of the State Theater. It’s a bit confusing since apparently the name was used by two different theaters in different eras. http://genealogytrails.com/ill/washington/statetheater.html

According to the history, this theater opened in 1948. It was built by Albert Smith and Alpha Hisey.

The October 8, 1949 issue of Showmen’s Trade Review said that the new State Theatre in Nashville, Illinois had opened on September 29.

The October 8 issue of Boxoffice also noted the recent opening of the new State Theatre, replacing the earlier State which was being converted into a garage. The owner of both States was Mrs. Alpha Hisey, the mother of Gradwell Sears, who was then the President of United Artists. The new house originally seated 488 in a building 42x120 feet.