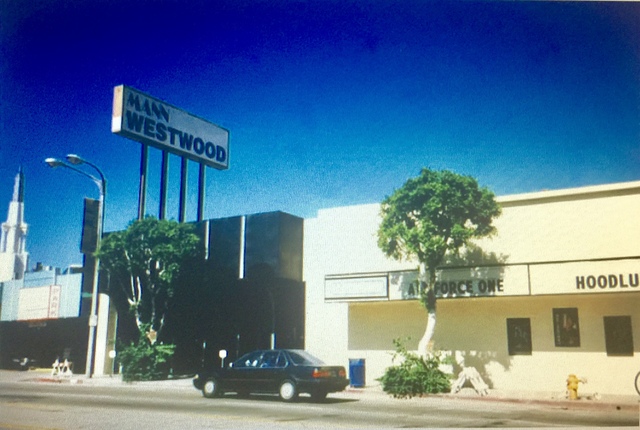 Opened as a triplex on December 25, 1975 showing art house films, it was later turned into a move-over house. In 1985 the largest auditorium was split in half to make a 4-plex.

After over 25 years of delighting Westwood audiences, the theater closed in April 2002 to make way for a Whole Foods Market.

I saw the mid 80s version of Godzilla at this theater. I remember the scenes were Raymond Burr was spliced in, pretty much just standing there talking like Basil Exposition in the Austin Powers films. The audience had a good time.

Did extra here. Knatcal, how sad, the National is gone???

I only went here twice – the first time was to see “Pulp Fiction.” It was Christmas 1994 and I was visiting home during winter break at college in Louisiana. By that time, “Pulp Fiction” had already gripped major cities in a frenzy but, with me being in Boondockville, LA, I only read about it in the paper. So I hauled myself on down to this theatre where it played in its largest auditorium. The place was (still) packed and the Dolby Digital was in full effect. 2 hours later, I was caught up in the frenzy like the rest of the world. To this day, this was one of the best movie theatre experiences of my life. Unforgettable!

And it happened at an uneventful moveover house. :)

Is that Whole Foods a complete rebuild or did they use the original structure? I hope someone will come up with a picture of the theater back in the day. I saw a few films there in the late 1970s (“Fedora”, “Airplane”) but I’m totally blank on the way it looked.

The original Paramount release(1975)of “The First Nudie Musical” opened here and at the Fox in Hollywood.

Closed in 2002 to become Whole Foods? What happened to Mann’s plans for a new multiplex? What replaced the National?

Are the Village and Bruin still major venues?

Nothing replaced the National. The Village and Bruin are well kept and still as wonderful as they have ever been. The Villag, Bruin and Landmark Regent are the only operating theatres in Westwood Village currently.

This opened on December 25th, 1975. Grand opening for it as well as the Old Towne Mall expansion in Torrance in the photo section.