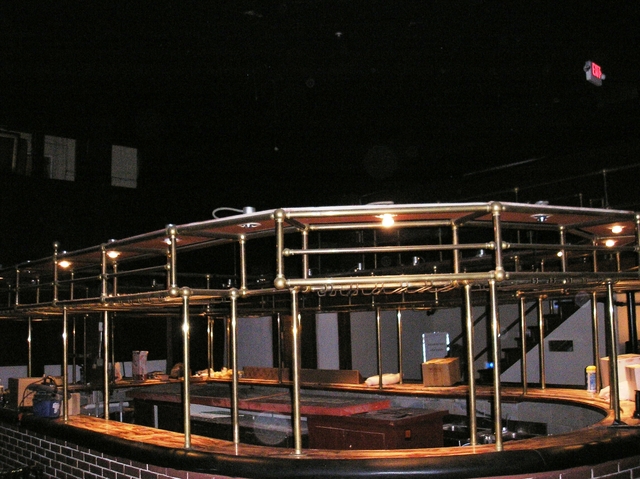 The Cobb Theatre is the little sister of the Strand Theatre a few doors up the block. It was opened in late-1939. Although the building has hosted various tenants since it ceased showing movies, most of the theatre décor, at least on the exterior, is still intact. I noticed during a visit to Marietta earlier this year that the building seemed vacated. It would be great to see both it and the Strand Theatre restored to their former glory.

Was a Cobb Theaters property. I knew a guy who was the manager there at one point known as “Cobby”, who went to work for Martin and stayed on until after Carmike took over. I never knew the Cobb to be open as a theater and have heard that it closed sometime in the mid-60’s.

Here is a 2003 photo of the Cobb: http://www.flickr.com/photos/maincourse/
Unfortunately the digital camera I was using at the time had a very low resolution.

Here are a couple of interior and exterior shots of the Cobb made last month. Amazing how much of the original theatre is still intact. The current tenants, the 3 Bear CafÃ©, have put a lot of effort into it.

Here is a photo of the old Cobb Theatre.
View link

I remember going to the Cobb in the 1940’s when there was a break in between reels of the movie. I guess one of the projectors was broken, and they had to load the next reel on the one working. I think the movie was either a western or a Judy Canova movie.

In the 1950’s my sisters, Jerry & Shirley Wallace worked at the Cobb & when I was about 5 yrs. old they started taking me with them to see the movies & then Sharky, the bellhop would help me cross the street to play in the park by myself. My sister could see me from the ticket booth. Boy was that a different world! Does anyone remember Sharky or know anything about him?

Recently, the Cobb Theatre has been occupied by a succession of restaurants. During it’s existence as the Three Bears, Jack took the picture that he has at his site and I also saw that room as it is depicted there. Since then that restaurant has closed and the theatre is now home to a different restaurant. I’m not sure how that has affected the integrity of the theatre appearance. I saw movies at the Cobb several times in the 1960’s.

The January 6, 1940 Boxoffice said: “Marietta— A new theatre, the Cobb, has been built on North Park Square.” It might have opened in late 1939.