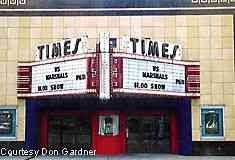 The Streamline Moderne-style Times Theatre stood on Vermilion Street near Woodbury Street and could seat 560. The Times Theatre opened in 1941 and was part of the Constan Circuit. It was closed and razed in 1999 to make way for a pharmacy.

Photo at this link:
View link

1997 – run by Kerasotes Theatres. Showed second-run movies for $1 during most of the year, with first-run movies shown at regular admission during the summer. News-Gazette online

DANVILLE – A new CVS Pharmacy is scheduled to open by the end of July at the corner of Fairchild and Vermilion streets.
But some residents don’t like the idea of a generic chain store replacing the character of the 1920s-era Times Theatre, which will be demolished to make way for the new drugstore.
“It’s really disappointing,” said Jean Beck, a local preservationist. “I think there are a lot of people who are frustrated by this sort of thing. We tend to put up more boxes that don’t have the visual interest and aesthetic appeal that commercial buildings formerly had.” ……..

Kerasotes, to their credit, kept all the neon functioning beautifully until the very end. The final movie was “Forces of Nature” starring Ben Affleck and Sandra Bullock.

My name is Gary Blankenburg and my father, Walt, managed the Times Theatre from about 1946-1962. My family and I lived above the theatre; my bedroom had been the ladies bathroom at one time. Six steps away was the Cry Room (a sound proof little theatre with about 20 seats designed for women with babies), and a few steps beyond that was the projection booth. I spent a lot of time in both of those rooms and saw a movie every day of my life and, of course, many cartoons. My father conducted a game of Wahoo (a kind of bingo) in between features. It was a magical time for me. If you saw Cineman Paradiso, you have some sort of notion of my childhood. I have quite a few photos I’d like to post, but I’m not sure how to do it. Can anyone help me?