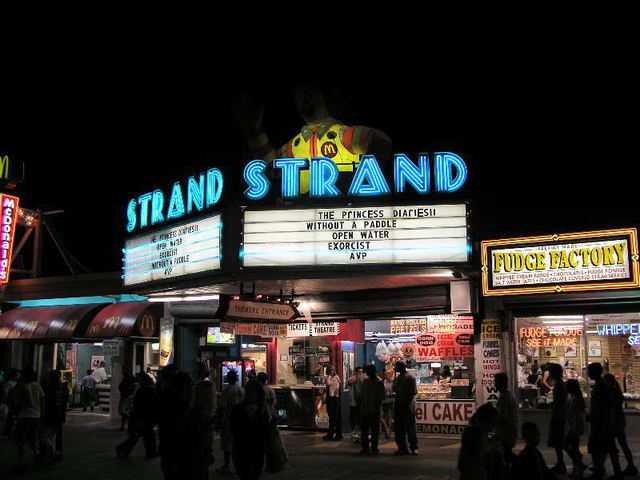 The Strand Theater opened in May of 1947 and was built for Hunt’s Theaters Inc. All seating was on a single floor. The projection booth was located over the rear seating area.

In the 1980’s the Strand Theater became a four screen multiplex theater and finally had five screens. Its lobby and Boardwalk entrance were turned into an arcade. The new main entrance is now located on Maple Avenue which was previously used as an exit. The Strand Theater was closed in 2012.

Hunt Theatre Enterprises intended to build their new Strand Theatre on the same site as their previous Strand, according to an item in Boxoffice Magazine of October 13, 1945. The architect’s rendering of the facade of the proposed house published in the magazine matches the photos linked above quite closely. The architect of the new Strand was William H. Lee, of Philadelphia.

Has this theater closed also? The posting on the Sea Theater which is now closed said it was the last operating theater in Wildwood.Wildwood had great theaters when I was growing up. UGH If so update status to closed.

Yes, it is closed. See the mentions here:

Sorry, but I remember meeting the Mickey Mouse Club members the day they came to town to promote a movie and it was the Shore theater, not the strand, unless they went there too, but I doubt it.

staceygreenspan’s memory is confirmed by another CT member. Thehillsarealive’s comment on the Ocean Theatre page recalls the MMC cast members appearing at a Wildwood theater one fall day, and also says that the Hunt circuit always closed all the theaters in Wildwood except those on Atlantic Avenue after the tourist season ended. As the Strand was on Boardwalk and the Shore on Atlantic Avenue, it must have been the Shore where the cast appeared.

Was in Wildwood yesterday for the first time in many years. The Strand is closed. All retail now. Same for the Ocean Theatre a few blocks down. There is this big water slide attraction where the Shore Theatre once stood. Its so sad. I remember in the 80’s going to all those theatres.

does anybody know who owns the strand theatre building now ? would love to contact them please

I’m sure if you go to the wildwood town hall of records they should have info on who owns it. I would love to see this place back up and running.