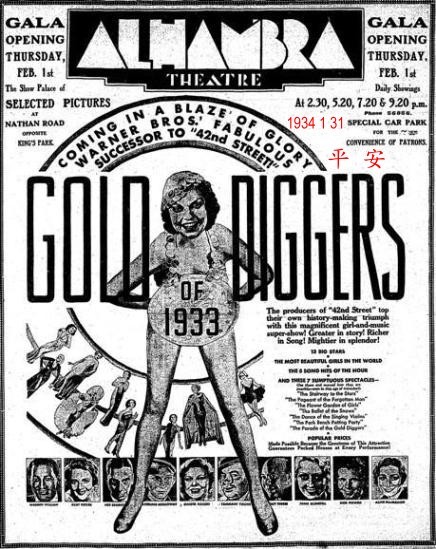 The Alhambra Theatre was the first luxurious theatre being built on the Kowloon Peninsula of Hong Kong. The opening date was 1st February, 1934. The first movie being shown was “Gold Diggers of 1933”. It was closed on 1st May, 1958. It was rebuilt as a ugly highrise residential building. The last movie shown was “Bali”.

According to the news published by the evening newspaper, the China Mail:
“The auditorium is fan-shaped, with seats giving an excellent view of the screen from every part, while at the same time the acoustic properities of the house are beyond cavill. The tastefully decorated lobby at the main entrance in Nathan Road covers an area of 2000 square feet. Seperate exits have been provided, so that the audience leaving the building will not crash with those waiting in the lobby. The dress circle is the largest in the Colony, having a clear span of 110 feet and a depth from back to front of 52 feet. The whole of the reinforced concrete framework passed all tests in May 1932, to the satisfaction of the Building Authority. A feature of the dress circle is that entrance is provided in the centre by a stairway to the front.

The architects are Messrs.T.C. Wong and Company."

A tragedy happened after its closure, during the demolition period, when the former theatre building collapsed and injured many passers-by and construction workers.

Here is a May 1958 LA Times article about the demolition accident:
http://tinyurl.com/326utb

The Alhambra Theatre was renamed as Ping On Theatre in late 1942 during the war years.
Ping On is the Cantonese pronunciation of its Chinese name.

There is an old photo of the theatre in Flickr:
View link

The auditorium was on the ground floor of the theatre building.

Its Chinese name is 平安戲院.

According to an advertisement published by the South China Morning Post on 9th December, 1941,the cinema suspended cinema performance until further notice. The war broke out on 8th December, 1941.

A new air-condition system was installed in the theatre as of 14th July, 1950. New RCA projectors were also installed.