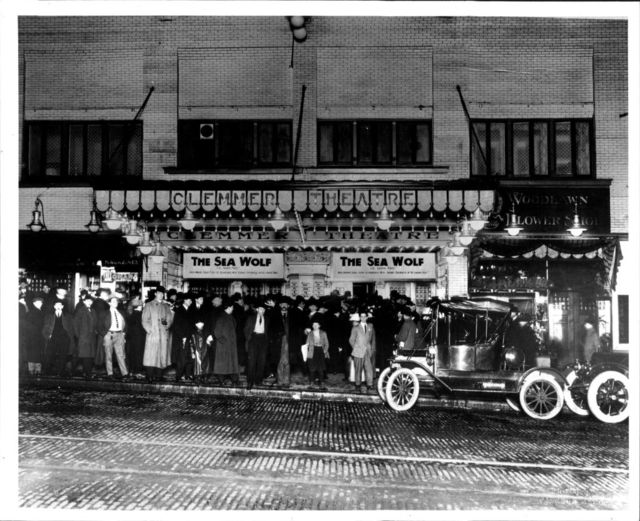 Considered to be the first theatre in Seattle constructed primarily for the exhibition of motion pictures, the Clemmer Theatre bore the name of James Q. Clemmer, who spent $135,000 to construct the movie palace.

Seattle had several movie theatres before the Clemmer Theatre, but most were either remodeled storefronts or live theatres that also showed movies.

That the Clemmer Theatre isn’t as well remembered as other Seattle theatres isn’t surprising; it bore the Clemmer name for only nine years before being renamed the Columbia Theatre in 1922.

In 1912, the Seattle Times described the theatre: “The old Roman style is in vogue, plain columns set off by flaming electric torches. These torches are decidedly unique and something new in the manner of theatrical lighting in the West”.

One of the standout elements of the theatre was its organ. On April 7, 1912, The Seattle Sunday Times reported: “Great Organ to Be Installed”.

“On either side of the proscenium arch, in large specially built niches will be placed the pipes of the massive pipe organ which will be one of the largest and finest on the Coast. This organ is being built in the East, but could not be completed in time for the opening of the theatre. It will be installed within the next thirty days. Oliver G. Wallace, recognized as a genius in the interpretation of photoplays on the pipe organ and piano, will be the player”.

The Clemmer/Columbia building still stands today, but it now houses a restaurant.

The building that housed the Clemmer/Columbia theatre has long since been demolished.

The Clemmer Theatre had a III/28 Estey organ installed in 1912. Ten years later, when the hall became The Columbia Theatre, the Estey was removed and a II/9 style 210 Wurlitzer organ, opus 533, was installed.

John and James Clemmer originally announced that their new moving picture theater on Second Avenue would be called the New Empress. The October 28, 1911, issue of The Moving Picture World had this story:

“Seattle, Wash. — A modern, up-to-date $100,000 exclusive photoplay house on Second Avenue is the latest big addition to Seattle’s theatrical enterprises. The new theater will be located at 1412 Second Avenue, between Union and Pike Streets. John H. Clemmer, owner of two theaters in Spokane, and his son, James Q. Clemmer, owner of the Dream Theater in this city, are financing the moving picture venture, and they assert that their new house will be the finest of its kind in the West, and will be opened to the public about March 1. Plans for the new theater are already being drawn by Architect E. W. Houghton, of this city. The theater will be 60 feet by 108 feet, and will seat about 1,500 people. This new enterprise will be known as the New Empress Theater.”

Edwin W. Houghton was very busy around this time, designing several theaters in Seattle and the northwest in the early 1910s. From 1909 to 1911, B. Marcus Pritica was a draftsman in Houghton’s office, but I don’t know if he was there long enough in 1911 to have worked on the Clemmer Theatre.