April 2021 an application was submitted to the city to demolish the Allwood Theatre and replace it with 5 retail shops at ground level and a 4 story apartment building for seniors. It would be 42 age-restricted units. Several major variances would be needed.

Growing up in Clifton in the 1960’s on Beverly hill rd, all the neighborhood kids use to spend are Saturday afternoons there. In 1968 my best friend & I both became ushers and had the time of our lives. We started when they were showing Yellow Submarine and it was held over for weeks. Couldn’t get the songs out of my head. One of my duties was changing the posters when a new movie came in. I had the greatest poster collection until mom decided to clean out the basement one day.

This theatre and the Clifton theatre both reopened as a twin cinema on December 15th, 1978. Grand opening ad posted.

According to Google reviews, they are renovating some seats in order to compete against the nearly 20 year old Clifton Commons complex which has reserved seating in all their screens. 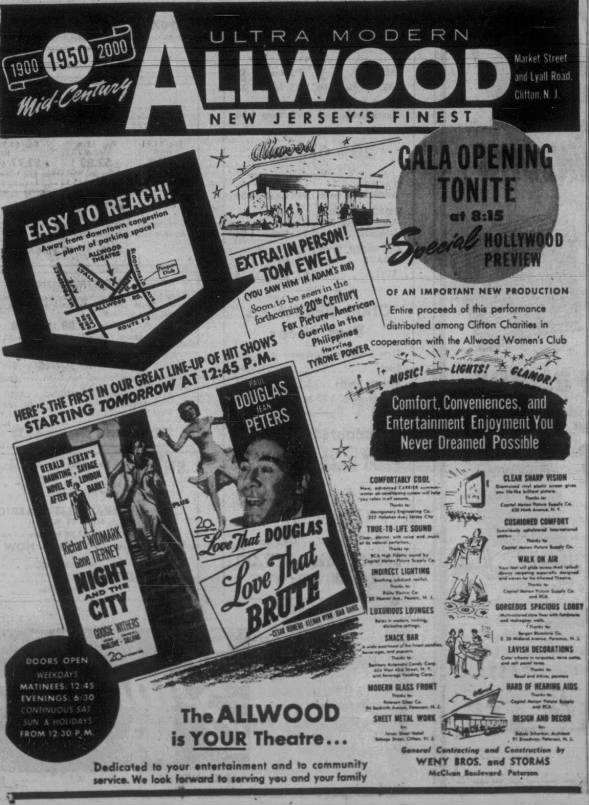 On this date 40 years ago, Superman premiered in Dolby Stereo.

It was at this theater where i went all the way on my own to see “A Bugs Life” where I saw the teaser for “The Phantom Menace” a week after the trailer made its debut in limited release. I already saw the trailer on tv so i knew what the crowd had in mind before the movie began. Little did I know was that Lucasfilm would soon be part of Disney.

It will be five years since empire took over from Clearview and according to emails I get from them it’s still open.

Reserved seating doesn’t need to be at this theater, it has suffered from wear and tear.

Since AMC is installing recliners in theater #8 for clifton commons' amc dolby prime, this theater is in danger of being extinct.

I’m surprised this theater hasn’t been closed by the health inspectors and/or the free market. Empire Cinemas knows how to run theaters into the ground, they’re even too cheap to install an automated light system to switch on so you can find your seat (they usually thrown on the cleaning lights or don’t turn on the lights at all). Not to mention recliners that are broken/missing parts, poor presentation, and the fact they moved the old Columbia Park seats into the two larger houses (they’re not fully a recliner-plex). Empire Cinemas and AMC are just simply the worst – it really sucks for Clifton.

Commons is in a slightly better state of repair truth be told, but needs a full renovation immediately (the last show I attended had whole rows replaced with seating that didn’t match the rest of the auditorium – probably salvaged from an AMC that underwent a recliner conversion – plus they left the 3D polarizing filters in place for a 2D movie that was already dark and grainy by design – terrible company).

Saw “Still Alice” last winter. The theater looked like a messy room with stuff laying all over the floor. The theater had a dank, dark atmosphere and there was a lot of noise throughout the film (air blower?) Not a good theater but for the neighborhood I’m sure it works. This theater is still up and running

This place went through a cheap renovation. You see the wires for the recliners stick out and a post where you plugged in the recliners. You see the footprint of the former row of seats. The just touch up rather than to paint the floor.

Visited yesterday for Hercules – the good: it was clean and leather recliners. The Bad: yes, they’ve gone digital (no 3D but thats no deal breaker for me) but they never bothered to replace the glass in the projection booth – so in at least two auditoriums you’ll see a dark line running down the frame at some point. The picture was ¼th dark and out of focus – not acceptable (at least two others walked out along with me). The reason the management gave “the owners are working on it”.

Otherwise with a little more fixing up it could be great – they need new wall treatments (the one in the theater I was in had water damage), new glass in the booths and an automated lighting system that doesn’t leave the theaters dangerously pitch black between screenings – – and then the place would be fine.

All digital but did they change the architecture. This is a horrible theater. The two theaters in the front are like sitting in a basement. The others are just as bad. Haven’t been there in 10 years and plan to never go back.

they even have a facebook page too. All screens now digital, both picture and sound, though there’s no 3d projection.

What is the name of the operator come June 9th…