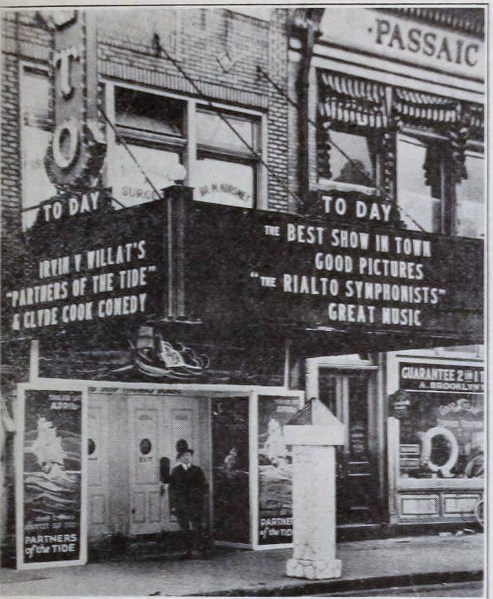 Opened on January 13, 1917 as the Rialto Theater. Listed as the Lincoln Theater in the 1951 Film Daily Yearbook.

The site of this theatre is now an empty lot.

Check out this 1963 ad for “Tonight for Sure”, courtesy of Bill Huelbig:

Tonight for Sure was a nudie directed by Francis Ford Coppola!!!
Click here.

Sometime around 1961=2 the Fine Arts was severely damaged by a firebomb placed in the auditorium. A salvage company was allowed in to retrieve equipment from the projection booth and the rest of the structure was demolished within a couple of days. It would seem that even the innocuous fare like the Coppola pic was unnacceptable to at least one intolerant person!

Listed as the Lincoln Theatre in the 1944 FDY.

This 1916 book attributes the design of a proposed (but as yet unnamed) theater to be built at Lexington and Main Avenues to Abraham Preiskel (most other sources give this architect’s as Abram Preiskel.) I wonder if that could have been this theater?

The Ray Amusement Company established in 1916 in downtown Passaic at 37 Lexington Avenue and launched the Rialto there on January 13, 1917 likely on a 20-year lease. In November of 1929, both the Palace and the Rialto converted to Western Electric sound to play talkies.

Harry Hecht shut down the Rialto in March of 1938 for a refresh to the plans of architect Eugene DeRosa that included new air cooling system, a more modern look, new floors, lobby, signage, and box office. The theatre re-emrged as the Lincoln Theatre on a new 20-year lease. Pictures are in the Photos section.

The Lincoln Theatre shut down in 1958 at end of lease and, after another refresh, relaunched as the Fine Arts Theatre on May 29, 1958 showing art films. In 1960, art films were paired with adult films with the theatre running more adult films by year’s end and to its end of operation. The theatre suffered a minor fire in 1964 but continued operation. During its run, the film switched to adult films running to January 12, 1970 when it appears to have closed with “Lady Godiva Rides Again” and “The Girls” (1968) running under the name, “Lysistrata.”