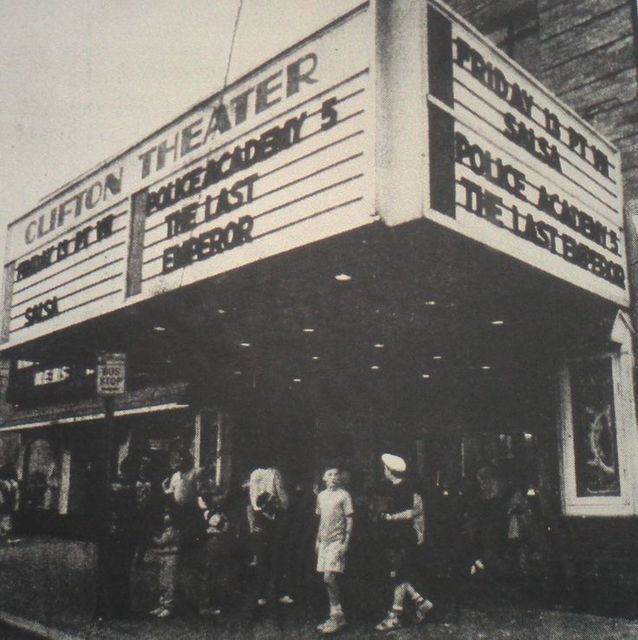 Located at the corner of Main Avenue and Clifton Avenue. Opened by 1927, the Clifton Theatre was listed as (Closed) in the 1932 edition of Film Daily Yearbook as a silent movie theatre. It disappeared from listings until 1939, although the theatre actually re-opened December 31, 1937 as the ‘New’ Clifton Theater with Paul Muni in “Emile Zola” & Bing Crosby in “Double or Nothing”.

This theatre was the oldest theatre in Clifton and managed to survive throughout the early years of the 21st century despite competition from the upscale Allwood sixplex and the bigger Clifton Commons. Known for playing urban film fare, the place was closed in April 2000 and demolished in 2000-2001 to make room for a new Walgreen’s, which stands where the old theatre used to be. The only bad theatre that I went to while I lived in Clifton, with poor projection, bad sound, and uncomfortable seats.

very interesting article. BTW, Stanley Warner owned the Ridgewood theater. The person who replaced the relief manager at SW must have overlooked what would become the two Paramus theaters.

During the credits of “FernGully”, the picture was black while the sound was still on. This theater was the second one to be located not too far from a Blockbuster video store right down the street from its location (the other one is at Clifton Commons). At the time of its closing, it, along with the Franklin, were the only theaters not owned by Clearview, General Cinema, and Loews Cineplex. They were independently run by true employees who know it best.

Last week marked 10 years since this theater closed down. It was at the time the oldest movie theater in town and showed its age once Clifton Commons opened. Did this theater ever had 70mm projection and dolby sound during its operation?

Probably not. The Clifton Theater probably showed silent films for the first time in Clifton in those days, then came sound, and the occasional old 3-D flick. In recent years, the theater became a popular venue for kiddie and urban fare that the Allwood wouldn’t play. With the acquisition by Clearview, the Clifton Quad remained an independent theater for the rest of its lease.

This theater was the only theater in Clifton to show Raiders of the Lost Ark, according to a post by a CT user commemorating the 30th anniversary of that iconic film. They showed it in Dolby Stereo 35mm. When did it become a quad theater from being a single screen?

Grease was shown in dolby nearly 40 years ago here.

This theatre and the Allwood theatres both reopened as a twin cinema on December 15th, 1978. Grand opening ad posted.

30 years ago this week I saw teenage mutant ninja turtles here and saw the sequel at the wayne movietown when it was a ua the following year. Both were good movies but didn’t care for the third one. The 2014 version was ok but the 2016 was meh.

My parents lived in Clifton for about 9 months starting around December 87 and when I’d visit them from NYC I’d go to this theater to get a little alone time. I guess I was lucky enough to see newer films here because I never got stuck in the smaller screens upstairs. Saw Throw Momma From the Train, Planes, Trains and Automobiles, Poltergeist III, and Vibes, probably a couple others. I liked the place. It felt like a nice little neighborhood theater.