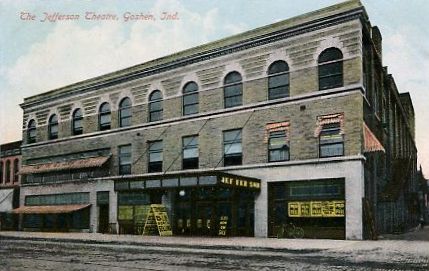 The Jefferson Theatre opened as a legitimate theater on November 5, 1905 and was designed by architect James M. Wood. It was destroyed by fire in 1906. A new Jefferson Theatre was built and opened in 1907, designed by architectural firm Patton & Miller. It later turned to movies and was remodelled in 1938 by Chicago based architect Lawrence Monberg or architectural firm Monberg & Wagner. It was later renamed the Goshen Theater and closed in 1986. The former movie house became home to a church. Today it is being used for meetings, performances and special events.

Its my understanding that when the Jefferson was rebuilt in 1907 after the fire they did not keep the 2nd balcony or the box seats. Then in 1948 they renovated the marquee making it a v-shape which caused the name change from Jefferson which didn’t fit on the new marquee to Goshen. AND at that time they also renovated the seating. We now hold 717.

Here is a recent article on the church’s efforts to maintain and restore this theater and expand its use by the community: View link

The July 4, 1908, issue of The Moving Picture World ran this item, datelined Goshen, Ind.: “The New Jefferson Theater has been leased to E. R. Joseph for a moving picture show.”

A 1905 book titled “A Twentieth Century History and Biographical Record of Elkhart County, Indiana” (Google Books scan,) edited by Anthony Deahl, describes a new “Goshen Opera House” which was then under construction, but from the description it is clear that it was the Jefferson Theatre.

The Jefferson Theatre was designed by the noted Chicago theater architect J.M. Wood, who in the late 19th century nearly rivaled John McElfatrick in popularity as a theater designer.

Here is th Goshen Theater’s web site (they use the -er spelling of the T word.) The history section says that the original Jefferson Theatre was destroyed by a fire in 1906, and the house was rebuilt in 1907.

The May 25, 1907, issue of the Chicago-based business journal The Economist said that the architectural firm Patton & Miller (Normand Smith Patton and Grant C. Miller) were designing the New Jefferson Theatre. The firm and its predecessors Patton & Fisher and Paton, Fisher & Miller, are best known today for having designed more than 100 Carnegie libraries nationwide, including the one in Goshen.

The River Bend Film Festival has transplanted itself to Goshen (I believe it was native to South Bend), and it’s fifteenth annual season was presented at the Goshen Theater on March 31-April 2. The festival’s Facebook page has a few photos with glimpses of the Goshen Theater’s interior.