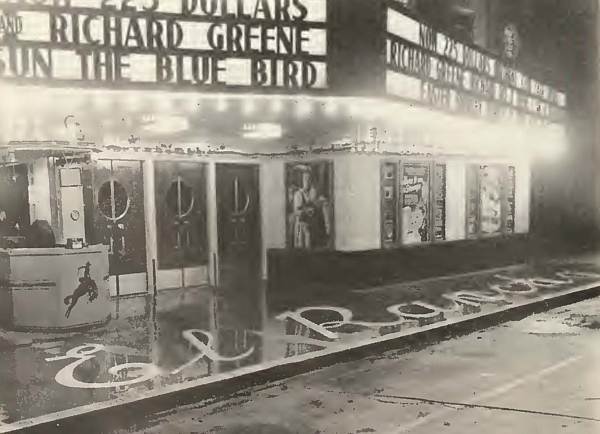 A large Art Deco style theatre built across the square from the Rita Theatre and the Uptown Theatre. Owned by Long Theatres, it was opened on February 2, 1940 with Preston Foster in “Geronimo”(The Story of a Great Enemy). The El Rancho Theatre burned in early-1970’s, and could not be saved despite being located one block from the fire station downtown. The fire was started by a workman who was servicing the AC system, who was smoking and evidence pointed to ashes starting a dust fire in the air ducts. Building was engulfed in minutes. Tomasita, the downtown cat, survived this fire in addition to the earlier fire at the Venus Theatre.

Oddly enough, this fire put Long Theatres in a position to where the chain folded soon thereafter, while boosting Frels Theatres which was on the verge of folding, since Frels Theatres now had a hold on all of the Victoria market without competition.

Here is part of an article from the Victoria Advocate dated 9/20/75:

The colorful 35-year history of El Rancho Theater came to a blazing end Friday morning two days after bringing to its giant screen the story of mobster Al Capone, â€œthe man who made the Twenties roar.“ Water-soaked reels of the movie, billed as the true story of Capone, were sadly placed on the sidewalk across the street from the theater Friday afternoon as fire investigators sifted through the rubble attempting to find the cause of the fire.

At the same time, J. C. Long of Bay City, owner of the theater, estimated the loss of the building, which was completely gutted by the blaze, at “half a million dollars.” Another official of the widespread Long Theaters chain, Harry Worth, also of Bay City, said equipment and the 1,100 seats in the theater alone were valued al $150,000. Long arrived Friday afternoon to inspect the ruins with Worth and Hayden Curliss, manager of the theater for 12 years, and an employee of the Long chain since 1928. Long made no immediate decision as what he will do with the building.

Tomasita, downtown Victoria’s favorite cat, is alive and well although the place she liked best was destroyed by fire Friday morning. She appeared somewhat bewildered Friday, heading toward the old bandstand in DeLeon Plaza to escape the attention of the crowd that gathered to watch firemen battle the blaze.

Here is a July 1972 ad from the Victoria Advocate. Theme song by Michael Jackson.
http://tinyurl.com/lfh4kg

The El Rancho opened on February 2, 1940 at 6:45 p.m. The premier feature was “Geronimo” with Preston Foster and Ellen Drew.

As noted in the Boxoffice article that Tinseltoes linked to, Victoria’s El Rancho Theatre was designed by architects Corgan & Moore.

A photo of El Rancho Theatre burning heads this article from the June 23, 2012, issue of the Victoria Advocate. There is also a bit of information about Victoria’s other theaters.

The theatre launched Feb. 2, 1940 with “Geronimo.” It converted to widescreen for CinemaScope in 1954. It burned down on September 19, 1975 with the last film of “Capone” when an air conditioning repair went wrong. 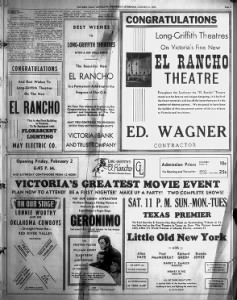