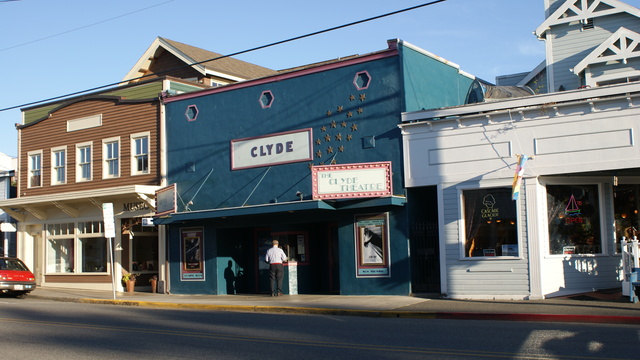 You don’t get more family owned than this theatre.

The Clydes ran the theatre from 1937 until they sold it in February 1972 to Blake Willeford. (Willeford married the Clydes' daughter, Lynn, im 1978 – so the theatre is still in the family!)

Blake Willeford added a stage so the Clyde Theatre could host musical acts and the live theatre productions of the Island Theatre troupe.

The Clyde Theatre underwent an extensive seismic retrofit in 1992. In 2002, the 65-year-old seats were retired, and more comfortable seats with cupholders were installed.

The theatre switched to xenon bulbs from the old carbon-arc power supplies in time for “Amadeus” in 1985. Dolby Digital Sound was added in 2000.

The paint scheme has been changed and updated through the years. The number of seats has gone up and down; it currently seats 256.

The Willefords keep the prices low for both admission and concessions. They try to show the “big” movies as well as indie films; they actually strikes a really good balance.

This theater is located on the lower end of Whidbey Island (below the naval base). It’s about 20 miles south of the Oak Harbor Cinemas and Blue Fox Drive-in theater.

In 2012 The Clyde will be celebrating its 75th anniversary, and the 40th anniversary of my husband buying it. (Unfortunately I am NOT related to Norm and Hazel Clyde, so we didn’t get a family discount.)However, our son Brook will be taking over the theater, so it will at least stay in the Willeford family—maybe till the 100th anniversary!

The Clyde Theatre made the conversion to digital projection two years ago.