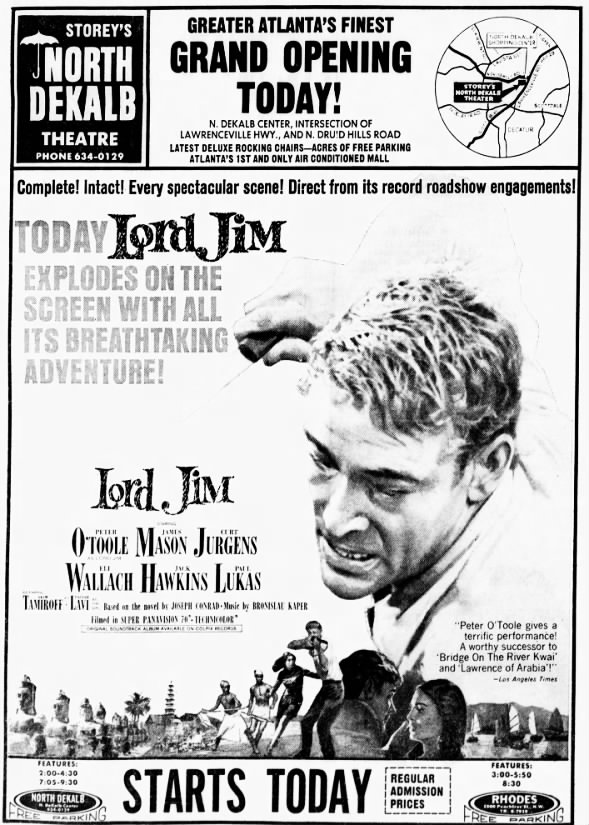 Ok, I drove by the theater today. Raymond was right – the footprints do overlap, at least from what I could tell. (Of course, the AMC is a LOT larger.) Whether or not the old Market Square theaters still exist inside, I don’t know – but it would be a little surprising, as I’d assume they’ve gone to all-stadium seating. I have added a picture of what used to be the box office onto the Market Square page.

You are absolutely correct Joe. I don’t know why I did not notice that. Not only that but there are not one but two pages for the current AMC 16 and to make matters worse I actually commented on one of them, something I have no recollection of. Guess that is what too many hours of listening to film click through the gates does to your mind. I never worked at any of these theaters and never was inside the quad or the 16, so my only information comes from my memory of the newspaper ads (back when there were ads in the paper) and talking to someone who once ran the booth for AMC.

Raymond Stewart is pretty knowledgeable about theater history in Atlanta and he seems to think that the space of the Cineplex was incorporated into the AMC. Maybe Josh can confirm this one way or the other. In the meanwhile I will let someone else clean up the mess regarding the duplicate pages and the question of having a separate page for the Market Square. While I only know a little of the history of the theater on this page, I know nothing dependable about the other two.

Maybe I should spend my time checking to see if there are any other rogue comments of mine out there.

StanMalone: I’ve never been to Decatur, but I believe the quad you are referring to is the one listed here as the Market Square Cinema 4. That’s the impression I’ve gotten, anyway. There’s not much information on its page.

Actually, the Cineplex Odeon at Market Square (four theaters) was not in the existing theater’s footprint. It was at the far back corner of the mall, in a space I now believe is just a blank wall on the outside. (I may drive by later to confirm). I’m pretty confident the opening was in 1987, based on what I remember seeing there. The last movies I remember seeing there were in 1993 (True Romance, Falling Down), and I’d be surprised if it lasted to the end of that year. AMC Phipps (1992 opening) may have been the nail in its coffin.

Like most first generation malls, North DeKalb underwent a rebuild in the mid 80’s. The theater wing was torn down and what stores of the original mall were left were remodeled as was the surviving mall area. (The theater was never actually part of the mall but had an outside entrance just outside the southern entrance to the mall area.) The Cineplex quad that was located in a newly built area on the west side of the mall was not officially one of their “Jewel Box” designs but looked a lot like them.

It was at this point that the mall was renamed Market Square probably because the mall was located in almost dead center DeKalb County and had two newer malls located to the north within the county limits. When it was built as the Atlanta areas first enclosed mall in the early 60’s it may have been located in the northern part of the population map, but by the mid 80’s it was central DeKalb in all respects. Some marketing expert probably came up with the new name which did not last long. Everyone likely to shop there knew where North DeKalb Mall was and before long the name was changed back to North DeKalb.

I do not know how long Cineplex stayed there, but I would guess that it was at the same time that they closed their Jewel Box theaters which were all 6plexes that AMC took over this location. I think that it was still a quad then and AMC increased it to eight. Later they doubled it again to 16. To answer you question Dennis, the Cineplex quad was located somewhere within the footprint of the existing AMC 16.

PS: Thanks Dennis for that great picture you posted on the Suburban Plaza page.

I grew up in Decatur, don’t remember Cineplex Odeon four-plex. Where are you saying it was located.

I am pretty sure you are correct about the Market Square 4 opening in the 86-88 time frame. The guy I was dating during those years lived close to North Dekalb/Market Square and we went to a big grand opening when the mall was re-launched and went to the theater there a few times. Nothing remarkable that I can remember.

Thanks everyone for the Storey North DeKalb information, some of which clarifies and corrects my comments. A summer 1965 opening for the theatre would be on target, although the BOXOFFICE dates should be taken with a grain of salt. As with most magazines, the publication dates would often be after readers had the pages in their hands. I do recall LORD JIM at the theatre and it feels right as the opening film. I have the recollection it was also playing at Storey’s Rhodes at the same time.

The 900 seats matter feels a bit inflated, as theatres often do. I’m thinking the total was closer to 850 seats. For years, the mall marquee at the front entrance of the parking lot said, I believe, “850 Rocking Chair Seats” from the theatre’s opening until the twinning.

For Charity “BOY OF TWO WORLDS” was Shown here.Sept 22,1974 BOXOFFICE.

Interesting, thanks for the info on the AMC North DeKalb Mall 16. The first movie that I remember seeing there was Alien: Resurrection in late 1997 (it was the second date with a woman I dated for almost 11 years, who passed away last year). We saw a lot of films there over the years, and I have a lot of sentimental memories of the all the good times we had there. Its also the closest theater to where I now reside.

I was wondering about the Cineplex Odeon name that you mentioned in your earlier post, thanks for explaining that.

AMC North DeKalb Mall 16 opened in 1996. The first movie I saw there was “Scream,” but it had been up and running for a few months by then. But actually, the theater I’m referring to was in the same mall, but a different location. It was a four-house Cineplex Odeon theater called Market Square 4.

I’m just seconding Joshmassey’s post. I can’t find a listing here for the AMC North Dekalb Mall 16 theater. I’d love to know the history of the place, if anyone could put together a page about it.

Boxoffice of August 9, 1965, said that “Lord Jim” had opened at Storey’s new North DeKalb Theatre in Decatur. That must have been the premier feature at the theater, as the August 23 issue of Boxoffice mentioned that the house had opened “Two weeks ago….”

Two small photos depicting the North DeKalb’s marquee and lobby appeared in Boxoffice of April 17, 1967. The article was about the Storey circuit’s new Lakewood Theatre in Atlanta, and said that both the Lakewood and the North DeKalb had been designed by the same architects, the Atlanta firm of Finch, Alexander, Barnes, Rothschild & Paschal, which was fairly active in theater design about this time. Each of these theaters had 900 seats, according to Boxoffice.

The June 21, 1976, issue of Boxoffice reported that the North DeKalb Twin had opened the previous month, bringing the total number of screens operated by the Storey circuit to 21. The twinned house had 450 seats on each side, according to Boxoffice, so given that the single-screen configuration had also provided 900 seats, and some space must have been sacrificed for the new dividing wall, the new seats must have been somewhat smaller.

Has anybody created a page for the Cineplex Odeon Market Square theater that opened in North DeKalb Mall?

I was so crushed when I went back to Atlanta to find this theatre torn down. I remember vividly seeing many wonderful movies there. The two greatest movie going experiences I had was seeing OLIVER! there in it’s “popular prices” run. Every Saturday my Mom would drop off a me and a friend to see OLIVER! Later it would be WILLY WONKA AND THE CHOCOLATE FACTORY. I saw that many times there too. Throughout the years I saw many others too, including THE HINDENBURG. I didn’t like it when they turned it into a twin theatre. That was the beginning of the end for that wonderful theatre. I think the last film I saw there was THANK GOD IT’S FRIDAY.

My recollection is this theatre opened in early 1966. It showed the occasional first-run movie (FANTASTIC VOYAGE) at the beginning of its life, but was more of a deluxe suburban run house with semi-exclusive titles before the movies trickled down into the neighborhood theatres and drive-ins. The first movies I saw at North DeKalb were THE RUSSIANS ARE COMING, THE RUSSIANS ARE COMING and THE GREAT RACE, but I don’t recall the order. THE GREAT RACE played around March, following its first run at the downtown Rialto. The movie went to the neighborhoods in June.

At Christmastime 1966, I was borrowed from the Emory to help in the concession stand at the North DeKalb during the first suburban run of THE SOUND OF MUSIC. Two shows per day and it was a mob scene, selling out time and time again. I hated working all day because it meant I was one of the chosen ones to sweep out that auditorium during the two-hour dinner break each day. It was very hard work, but I fell in love with that big screen and the theatre.

The North DeKalb was very successful and Storey Theatres management risked larger guarantees to nab bigger first-run titles and Atlanta exclusives. I remember hearing talks of twinning it as early as 1971, but their exclusive on DIRTY HARRY stopped that for awhile. It was a monster cash machine.

While in college, I jumped at the chance to become the full-time projectionist in November, 1972, although it was one of the lower paying jobs, a Storey trademark.

That Christmas, the North DeKalb had the Atlanta exclusive of JEREMIAH JOHNSON. It ran 8 weeks with turnaway business every weekend to the end. It could’ve played much longer, but Storey let it go when the movie went wide the next day. That was an astonishing decision to witness.

The funny thing about JEREMIAH JOHNSON was the company considered backing out of the first-run exclusive near opening day. They had a big guarantee down and were worried about making their money back. They decided to raise ticket prices from $2 to $2.50, a huge increase and price for Atlanta. They were worried customers wouldn’t pay the exhorbitant admission.

I quit in June, 1973, after HIGH PLAINS DRIFTER opened. I had had only two days off in all those months, which I had to beg for in order to fulfill schooling needs. (That was a grievance with my Union, not the management.)

I saw a few films on the big screen afterwards, including SHAMPO0 (1975). I worked relief a few times, showing THE HINDENBURG (1975). It wasn’t long before the dreaded twinning occurred. I ran the sad, cluttered booth with the destroyed auditorium once, maybe twice. The thrill was gone.

The North DeKalb was one of my favorite booths and theatres in my career.

As for the comparison to the Emory, I don’t get it. See the Emory Theatre thread for details.