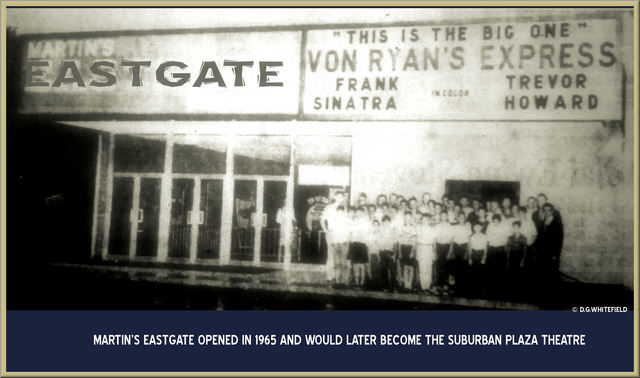 Opened by Martin Theatres in January 1965 as the Eastgate Theatre. It became part of the Georgia Theatre chain, the Suburban Plaza Theatre was a modest, clean and respectable single screen venue, although not very ornate. It seems almost every cinema, even if it was already part of a multiplex, was split in two during the 1970’s and the Suburban Theatre did not escape this blight being twinned on November 8, 1974. The Suburban Theatre was closed in 1984 and was soon demolished, its site was given over to more retail shops.

The Suburban Plaza opened as a Martin theatre in the early 1960s and was initially called the Eastgate.

I live close to Suburban Plaza and shop there quite a bit. I had no idea there used to be a theater there (I grew up on the other side of town). That explains the HUGE parking lot, and the mostly-vacant extra buildings there.

Built by the Martin Theatre Company in 1964 as the Eastgate. The shopping center and theatre soon underwent a name change to Suburban Plaza, probably because there was already an Eastgate Shopping Center on Columbia Drive near I-20. It opened in January 1965 on the same day as the Village and the Westgate Twin. Premiere feature was “Those Callaways.”

This was a time of big change for the Martin Company. Long a dominant presence in small towns across the southeast, it seems that in the late 50’s they decided to enter the big city first run market. The vehicle for this entry was to be the 3 strip Cinerama format which had started in 1952 and seemed to be gaining momentum entering the 60’s. Martin built at least four large and very plush theatres designed with Cinerama in mind. The ones in Seattle, St. Louis, and New Orleans were new construction while the one in Atlanta was a makeover of the old Tower Theatre.

In the Atlanta area there had been a Martin presence next door in Cobb County which in those days was not considered part of the Atlanta metro area. They had several drive ins and the indoor Strand on the Marietta square and the Belmont in the Belmont Hills Shopping Center in Smyrna. In 1960 they purchased the old Rialto just down the street from the Loew’s Grand. They soon tore it down and rebuilt it as a beautiful 1200 seat first run showplace. The Tower, located next to the Fox in midtown was completely rebuilt and became the 3 strip Martin Cinerama. When it became apparent that 3 strip was on its way out, Martin moved up I-85 to North Druid Hills Road and built a 70MM single strip Cinerama house and named it the Georgia Cinerama. After this, is seems that they decided there was a future in the suburban second run business and they opened the Village, Eastgate (Suburban Plaza), and Westgate Twin.

I was not living in Atlanta then so I do not know how these neighborhood theatres fared, but about 1968 Martin obviously had a change of heart. This may have been the time that the company was aquired by Fuqua, but regardless, they came to the conclusion that they were on the wrong track. They disposed of the four Martin Cineramas. The one in Atlanta which was notable for its 90 week run of The Sound Of Music, went to Walter Reade. (All of these theatres have pages on CT.) They kept the downtown Rialto and the Georgia Cinerama, but the Strand, Belmont, Village, Suburban, and Westgate were purchased by Georgia Theatre Company which operated them for the rest of their days. I do not recall exactly when they were closed but comments on some of their pages indicate the mid to late 80’s.

As far as this location is concerned I never saw it until 1974. I had worked for GTC during college and after graduation went to work for them full time until I could find a job more in line with my post college plans. They sent me to the Village as assistant manager and then added a couple of days at the Suburban Plaza as relief manager. This was during the summer of ‘74 and the only two movies that I can recall from my Suburban days are SPY*S and Born Losers. Neither was much of a hit and this 700 seat house was never even half full during any of my time here.

In the meantime, the Village, which had been twinned in the spring of ‘74 was doing great business. The extra screen not only added business but allowed the bookers to commit to the longer runs that were required to get the better bookings. In October of '74 the Suburban was closed for three weeks and twinned in an identical manner. The booth lost its 6000’ reels and gained two first generation Christie Autowind Two platters. I do not recall anything else being done to the theatre then or at any other time.

Business improved but never to the point of what the Village did. Having the North DeKalb a couple of miles away and the Scott Drive In just around the corner cut down on the choice of bookings. In 1976, General Cinema opened the Northlake 2 Triple next door to the Village and pretty soon that theatre was in the same condition as Suburban. Both locations went through the dollar house stage and I think that was their situation when they closed.

Suburban was demolished and a Winn-Dixie grocery store was built just in front of its footprint with the back loading dock area occupying the old theatre spot. I was by the site in 2006 and found that the grocery store had been demolished and a small strip of retail stores built in its place. I have not been there since, but I have heard that a Wal-Mart Supercenter is planned for that location and the entire shopping center might be gone by now. Other that these memories, the only notable thing that I remember about the Suburban Plaza Theatre is that it was and still is the only theatre I ever worked in where there was a lawn mower parked behind the screen and where the manager had the duty of cutting the grass around the building.

Dennis: Thank you for posting that picture. I have never seen a view of the theater from the Martin days. That group standing in front is too large to be the theater staff I would think. Do you know who it is?

Stan: The people standing in front of the theatre were Atlanta Times (newpaper) carriers and their district managers. It was one of the fringe benefits for those kids to see current films.

Stan: Check out this link. http://next-stop-decatur-ga.blogspot.com/2015/07/remembering-martins-eastgate-suburban.html

The Eastgate and the Westgate Twin both opened on January 28th, 1965. Grand opening ad in photo section and below.